From Zelda Dungeon Wiki
Jump to navigation Jump to search
Want an adless experience? Log in or Create an account.
Salvatore 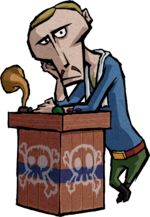 Salvatore is a very unenthusiastic character in The Legend of Zelda series.

Salvatore in The Wind Waker is the owner of the Sinking Ships mini-game on Windfall Island. He also runs the Barrel Shoot mini-game on Spectacle Island.

When Link meets him on Windfall Island to play the Sinking Ships, he doesn't seem to care if Link actually chooses to play or not.[1][2] When Link descides to play, Salvatore will put on a puppet show, explaining the rules.[3] He puts on an accent, pronounciating words highlighting 'V's and 'Z's.[4]

Just like the Sinking Ships, Salvatore will put on a puppet show of sorts when running the Barrel Shoot. This time however, he is playing the role of Gonzo, one of the crew members of Tetra's Pirates.[5] Furthermore, if Link succeeds at the game, Salvatore will wear a panel where he appears to be Tetra.[6]

Salvatore runs the Sinking Ships game 24-hours a day, where as he only runs the Barrel Shoot game during the daytime. At nighttime, Salvatore can still be found at the Barrel Shoot, but he is half asleep, telling Link to come back tomorrow.[7]

Salvatore makes another appearance in Phantom Hourglass. This time, he runs yet another mini-game on Bannan Island.