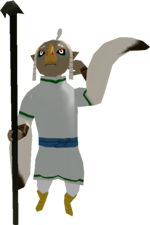 Hoskit is one of the Rito guards on Dragon Roost Island in The Wind Waker.