From Zelda Dungeon Wiki
Jump to navigation Jump to search
Want an adless experience? Log in or Create an account.
Vera 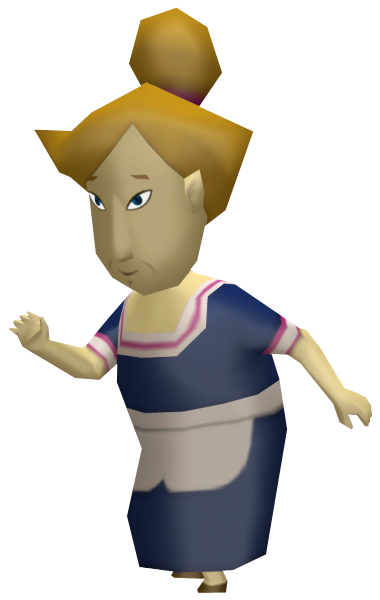 Vera figurine from The Wind Waker

Vera is a character from The Wind Waker, residing on Windfall Island.

The two gossip about numerous people and topics. Although when they can tell that Link is listening in, they will turn to him and call him a scamp.[1] Vera will tell Link that it's bad to eavesdrop on conversations that are only meant for adults to hear.[2] Pompie will tell Link that he's just way to young to understand what they are talking about and that he should shoo away.[3]

The two talk about how saucy Mrs. Marie is and that she has tons of pendants and earrings. As if she loves nothing in the world more than jewelry.[4][5]

Vera and Pompie will also talk about the Auction House, of which the two of them are regular participants. Both of them are super excited for the event, with Vera wanting to be the star of the auction.[6][7][8]

Putting the Rumors to Rest

Vera and Pompie think that Lenzo is a gentlemen and Pompie describes him as 'dreamy'. They have heard a rumor that Lenzo is involved with a woman and they wonder if it's true.[9][10][11][12] Link can enter enters Lenzo's house from the balcony, which can be reached after the Windmill is activated. After crawling through a small passage, Link will see Lenzo and Minenco and can take a pictograph of the two. of them.

Link can then show the pictograph of the two of them to Pompie and Vera.[13][14] After seeing the picture, the two admit that they were wrong about Lenzo having a girlfriend. Instead, it appears Lenzo and Minenco are just friends who share a hobby.[15][16] Pompie apologizes and thinks maybe they should stop spreading gossip like this.[17] Pompie will then give Link Treasure Chart 24, telling Link that her son had found it.