From Zelda Dungeon Wiki
Jump to navigation Jump to search
Want an adless experience? Log in or Create an account.
Orca 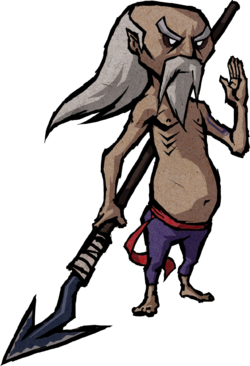 Orca is a swordsman residing on Outset Island in The Wind Waker.

Orca is one of the the elderly brothers living in the two floor house on Outset Island. He lives on the bottom floor, while his brother Sturgeon resides on the top, along with his great grand-niece Sue-Belle. Unlike his brother, who would much rather be curled up in bed in a quiet room with a book, Orca loves adventure and excitement. He encourages Link to continiously to try to gain strength, telling him he must build strong muscles.[1]

At the very start of the game, Orca is learning a Rolling Attack.[2] He teaches Link how to perform the rolling attack and encourages him to roll into the wall.[3] After successfully doing so, pots will fall from the wall, with Orca's brother Sturgeon yelling at them from the floor above.[4] Orca senses tha talent that is in Link's veins, but tells him that talent alone won't be enough to make it in this world. He must be bold, and Orca offers to teach him the art of swordplay.[5]

Orca is mostly known for his excellence in swordsmanship, and he teaches Link almost all the sword techniques, saying that he has to learn someday and it is right for a boy to know how to fight. Orca gives Link the Hero's Sword, which is the first sword Link gets in the game.[6][7][8][9]

Even after Orca teaches Link the basic sword techniques, he allows Link to play a minigame with him. In this game, Link must strike Orca with his sword as many times as he can without Orca hitting him. If Orca hits Link three times, the game is over. In the beginning of the game, Orca refers to Link as a mere page. If Link hits Orca 100 times, he bumps him up to the rank of "knight", and gives him a Purple Rupee. If Link hits Orca 300 times, he becomes a swordsman and gets an Orange Rupee, and then if he hits him 500 times he gains a Piece of Heart. If Link hits Orca 999 times, Orca will say that he has surpassed him, and give him a Silver Rupee. Also, if Link hits him 1000 times, Orca will say that he has lost track, since the game's counter only goes up to 999. After Link hits Orca 999 times, from that point on he will refer to him as "Master Link".

When they were young men, it was Orca and Sturgeon's dream to obtain ten Knight's Crests, allowing them to learn a powerful sword technique. After countless failed attempts, however, they both gave up. Orca realizes Link is a swordsman, so he sends him a letter asking him to collect the Knight's Crests, claiming it was the only true way to become a real swordsman. When Link brings them to Orca, he teaches him the Hurricane Spin. After this, Link is a better swordsman than Orca ever was, and Orca says that there is nothing else left for him to teach him.