From Zelda Dungeon Wiki
Jump to navigation Jump to search
Want an adless experience? Log in or Create an account.
Mako 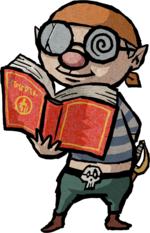 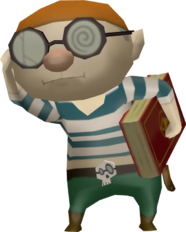 Mako is one of Tetra's Pirates in The Wind Waker. He appears many times throughout the game, and also makes a short appearance in Phantom Hourglass.

Mako is the brains of the ship and is the smartest member of Tetra's Pirates. He can be seen wearing glasses and is always carrying around a book.

When Link joins the pirates on the journey, Mako refers to Link as being the new swabbie. That distinction was previously given to Niko, but is now given to Link, as he's the newest member of the group, and thus the bottom rung of the pirate ladder.[1][2] Mako implies that because Link has replaced Niko at the bottom of the totem pole, Link has to obey Niko's orders.[3] He mentions that Niko can be found belowdecks, and that Link should head down and talk to him.[4][5][6]

During the Endless Night, Tetra's Pirates head over to Windfall Island to get some Bombs from the Bomb Shop. Mako can be seen talking with Bomb-Master Cannon, as he is being tied up. Mako mentions that they are only tying him up, because of the monoply that Cannon was running, asking pirates to pay an outrageous amount of money for some Bombs.[7] He mentions that it was Gonzo who smooth talked one of the Postman to get the information regarding the bombs.[8] When Mako and Gonzo met the Postman, Mako just pretended like he was actually worried about Link, and this is what caused the Postman to spill the beans.[9]

Mako does seem a bit suprised by Gonzo's uncharacterist wit that he showed. When he compliments Gonzo for smooth-talking the Postman, he mentions that this might have been the first time he actually showed such wit.[10] Mako makes a passing comment that with Gonzo's wits and Miss Tetra's smarts, if they ever got married and had a kid, that kid could be the greatest pirate to ever sail the seas.[11] This comment seems to embarras Gonzo, who scratches his head and calls Mako an idiot and stupid.[12]

Make seems to sense that Tetra actually cares about the wellbeing of Outset Island, making the safety of the island just as much of a priority as finding the treasure.[13] Although Tetra quickly shuts this idea down. After Tetra sees Link spying on them from the corner of her eye, she agrees to allow them to spend the night and they'll take off first thing in the morning. As the pirates are leaving the Bomb Shop, Mako asks Gonzo what the password is.[14] Gonzo chastizes Mako for forgetting already, but then tells the password, which Link can overhear.[15]