From Zelda Dungeon Wiki
Jump to navigation Jump to search
Want an adless experience? Log in or Create an account.
Aroo 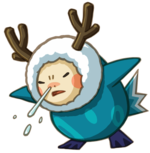 Aroo is an Anouki from Phantom Hourglass. He lives in Anouki Estates in the northwest of the Isle of Frost.

Aroo lives a peaceful life in his home in the Anouki Estates. However, one day, a Yook sneaks into the village and kidnaps him, then impersonates him. Link uncovers the imposter and drives him out of Aroo's home.

After Link completes the Temple of Ice, it is revealed that the Yook was only acting that way because he and the rest of his kind were being controlled by an evil force. Aroo is standing outside of the temple when Link exits, and he thanks him for the rescue.