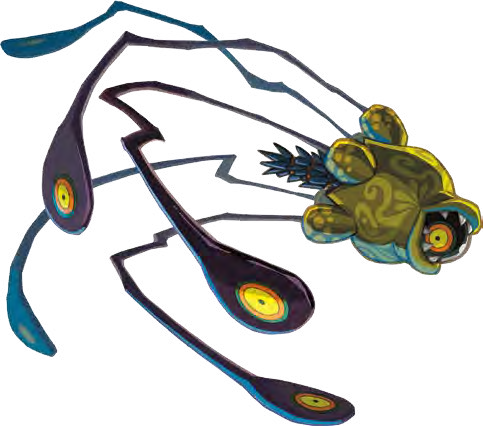 Bellum is the main antagonist and final boss of Phantom Hourglass. He can be fought once you reach the thirteenth floor of the Temple of the Ocean King. His battle has a total of three phases.

Bellum is a large, jellyfish-like creature with a patterned gold-yellow coloured body and a toothed "mouth" surrounding Bellum's singular black eye, with orange and yellow iris. He possesses a short, darkly coloured tentacle, and 5 evenly spaced, black tendrils or "marginal tentacles" with large ovular tips adorned with eye patterns that appear the same as Bellum's eye, reminiscent of a peacock's "eye feather" patterns.

Bellum's exact origins are unknown. One day, Bellum appeared and began draining all Life Force, an energy which every living being in the world possesses, that he could possibly gather. Oshus, the Ocean King, attempted to stop Bellum, but Bellum proved too powerful and trapped Oshus at the bottom of the Temple of the Ocean King, continually draining him of his Life Force. Bellum then proceeded to create the Sands of Hours, a crystallised form of Oshus' Life Force, using it to create monsters that he sent forth to seal away the Spirits of Power, Wisdom, and Courage. He also created the Ghost Ship to develop a myth of treasure to lure more victims into Bellum's trap for him to drain their Life Force. Bellum's greed attracted him to Tetra due to her great amount of Life Force and eventually manages to ensnare her, draining her Life Force and turning her to stone. This is not discovered by Link and Linebeck until the completion of the fourth boss, defeating the Diabolical Cubus Sisters on the Ghost Ship. After uncovering Tetra's fate, Oshus reveals himself to Link and Linebeck as the Ocean King and explains to them his history with Bellum. Eventually, Link makes it to the end of the Temple of the Ocean King, to the "Stairway to Bellum", after which he must face the Evil Phantom himself. After supposedly defeating the foul beast once and for all, Link and Linebeck witness the curse lift from Tetra, only to watch her be snatched up by the undefeated evil after Oshus offers a quick warning and explanation; the curse on Oshus is weakened, but not yet lifted. Following a ship battle and possession of Linebeck, Link finally defeats Bellum, lifting the curse on the Ocean King who now reveals his true form, a great white whale, and restores peace to the world.

Bellum during his first phase.

The battle begins with Bellum spitting out balls of purple ooze at Link. Link can easily avoid being hit by the ooze. However, if the balls miss, they will splash on the ground and turn into Slime Minions. These minions can easily be defeated with the Phantom Sword or the Grappling Hook. These attacks of Bellum are relatively weak and are easy to avoid. If the Spirit of Wisdom is at level two, equip it and the ooze will have no effect on Link. Use the grappling hook on Bellum to pull off pieces of purple ooze from its body. Keep doing this until all the ooze has been removed revealing only Bellum's green body. Then use the grappling hook on the small ooze part at the top to pull Bellum towards you. Equip the Spirit of Power and strike at Bellum's eye repeatedly.

After feeling the wrath of Link's sword, Bellum will hop out of the pool and head through to the second floor. Follow him up using the spiral staircase. Equip the Bow and circle around the room. Shoot an Arrow out at each of Bellum's tentacles. They each have an eye and once they are hit, they will turn purple. Be careful of the tentacles, as Bellum tries to use them as a whip to hit Link. Hit all five of them and Bellum will no longer be able to support himself and he will crash down back to the first floor. Run back down the stairs and Bellum will be back in his pool of ooze. Repeat the process you did before, using the grappling hook to yank off the ooze and then to pull Bellum close to you. Be careful as with each squirt, Bellum shoots out three splashes of purple ooze. After some more strikes with the Phantom Sword, Bellum will once again flee to the second floor.

Follow him up once again and watch out for the purple ooze that is shot at you while you scale the stairs. Repeat the process of shooting arrows at the eyes of the tentacles. This time however, there is a lot more ooze and the eyes will occasionally close. Just keep fighting at it and shoot all five of the eyes. This time instead of falling to the first floor, he will move higher to the third floor. Follow him up and you will find even more ooze here. His tentacles will periodically start to flap and try to slap at Link. Just keep moving around to avoid his tentacles. Use the arrows once again to strike the five eyes of the tentacles and send Bellum crashing all the way back to the first floor. However, just before falling to the ground, a green glowing ball appears and Ciela is attracted to it. As the fairy makes her way to the ball it explodes, revealing Oshus, the Ocean King! With Bellum weakened, Oshus is able to send out a message to Ciela. Oshus had his memories sealed behind the power of Bellum, but because he is weakened he can share these memories with Ciela. Ciela remembers here true identity. She is the Spirit of Time and Courage!

With Ciela's power restored, she can now help Link defeat Bellum once and for all. Run back to the first floor and the staircase will break off. You will see Bellum circling around his pool of ooze. Ciela releases the Phantom Sphere, which is a crackling ball of power that can stop time. Collect the orb and it will power up the Phantom Hourglass. After collecting a Phantom Sphere, the Hourglass icon will appear. Tap the icon and a square border will appear on the touch screen. Draw the Hourglass symbol that appears like the number eight. Once the yellow corners are in place, tap the hourglass symbol and without releasing it, move the stylus to the top-left corner. Draw a horizontal line to the top-right corner. Then draw a diagonal line to the bottom-left corner. Continue the line to the bottom-right corner. Then finish off the hourglass symbol by drawing a diagonal line to the top-left corner.

You need to draw the symbol fairly quickly, but don't draw the hourglass too wide or it won't work. Once you have correctly drawn the symbol, everything will fade to black and you will have frozen time. Rush over to Bellum and strike at the giant eyeball with the Phantom Sword. Remember to equip the Spirit of Power to deal more damage. Strike him as many times as you can before retreating to the bottom of the stairs as time resumes to normal.

Ciela will create another Phantom Sphere and toss it over to Link. Wait until Bellum is circling around the room and then draw the hourglass symbol freeze time once again. It is smart to keep close to the bottom of the staircase to avoid the route of the deranged Bellum. Repeat this process a few times until you have finally defeated the Evil Phantom Bellum.

Bellum possesses the Ghost Ship. Link must avoid being hit by this form's pink ooze. Maneuvering the S.S. Linebeck, Link must shoot at Bellum's eyes sprouting from the Ghost Ship in order to save Tetra. As the battle goes on Bellum will continuously replenish its ooze around the Ship, so you'll have to be accurate in getting rid of the ooze as quickly as you can.

Bellum's last stand and it is quite the battle. Bellum's new massive form is invulnerable at the front, but his weak spot is at its back. While Bellum moves quite slowly, he does turn quickly, so Link can't just circle around to his weak point. Just as in the previous battle, wait for Ciela to send out a Phantom Sphere. Get it just as you did before, freeze time, and run to Bellum's back side and strike at him with your sword. Wait, this doesn't even hurt bellum. Ciela will make this observation and the explanation is because Bellum's eyes aren't open. Ciela flies to check on Bellum's back eyes. Once they open, she is ready to release another Phantom Sphere but before she can do so she is captured by one of Bellum's tentacles.

While she has been captured, she still assists Link with her vision. What she views can be seen on the top screen. However, she no longer can release Phantom Sphere's, so Link is on his own in battle. Slash at Bellum a few times and he will jump to the side. Immediately change your direction and attack Bellum before he can get sword swipe of his own. Eventually the two of you will lock swords. At this point rapidly rub the stylus back and forth to break Bellum's guard and then quickly strike at his belly with your Phantom Sword, bringing him down to one knee.

While he is stunned for a short period of time, his grip on Ciela weakens and she is able to release a Phantom Sphere. Quickly run and grab the sphere. Watch through Ciela's view of the back of Bellum. Once Bellum's backside eye has opened up, quickly use the Phantom Hourglass to freeze time. Then run behind Bellum and strike at his eye with the Phantom Sword. Be sure to equip the Spirit of Power to inflict extra damage. Time will return to normal and Bellum will get angrier. Bellum will now perform a large spin attack, which is almost impossible to avoid. Just try to roll out of the way. Alternatively, if you have finished the trading sequence and acquired the swordsman's scroll, you can use the "great spin attack" to counter Bellum's spin attack. Then simply keep battling him using the same method as mentioned before until he has been defeated once and for all.