From Zelda Dungeon Wiki
Jump to navigation Jump to search
Want an adless experience? Log in or Create an account.
Vaati 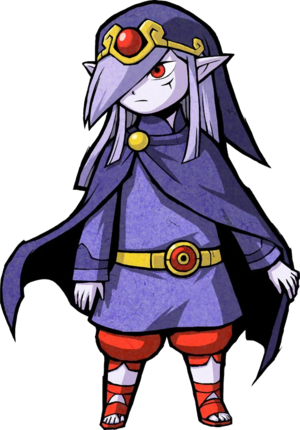 Vaati is a recurring antagonist in The Legend of Zelda series.

Vaati appears only in his Mage Form (An eye surrounded by black aura) and is the main boss in the game. He can be found at Vaati's Palace. At the beginning of the game, Vaati breaks out of the Four Sword and kidnaps Princess Zelda, who he intends to make his bride. He then carries her away to his palace lair in the sky.

Prior to the events of Four Swords Adventures, Link had rescued Zelda and sealed Vaati within the Four Sword. Soon afterward, Ganondorf stole the Dark Mirror from the Temple of Darkness and used it to create Shadow Link.

Shadow Link then captured Princess Zelda and the Shrine Maidens, forcing Link to draw the Four Sword from its pedestal and release the seal on Vaati. After reaching the Desert of Doubt, the Links discover that Vaati is not the real enemy and is simply a pawn of Ganon. Once they reach the Dark Cloud, the Links and Princess Zelda manage to remove the Dark Mirror and end Shadow Link's presence in Hyrule.

After reaching the Tower of Winds, the Links defeat Vaati once and for all. Soon after, they also manage to defeat Ganon and seal him within the Four Sword. Peace is returned to Hyrule once again, and the Four Sword is laid to rest in its shrine.

Vaati enters the game as the winner of a swordsman competition. It is revealed that he only won it for one reason: to get his hands on the ceremonial chest, which he believed contained the legendary Light Force. However, Vaati was wrong and when he opened the chest, there was nothing but monsters that escaped into the world. Angered, Vaati turned Princess Zelda to stone and set out to find the Light Force. He cares little for Link, a seemingly harmless boy.

Halfway through the game, Ezlo, a strange talking cap (who is in reality one of the Minish), reveals to Link that Vaati used to be a Minish. He was even Ezlo's student. However, he set his eyes on Ezlo's invention: a cap able to grant wishes. Vaati stole the cap, cursed Ezlo into his cap form and decided to search for more power.

As Link enters the Sanctuary for the final time, it turns out that the Light Force resided in Zelda herself. Vaati had followed Link, and revealed that he had disguised himself as the King of Hyrule since a little while back. He turns the entire royal castle into Dark Hyrule Castle, which served as the final dungeon of the game. He had absorbed almost all of the Light Force from Zelda when Link interrupts him. Believing that he did not need more of the Force, Vaati tries to defeat him and transforms twice. However, Link succeeds and tries to escape with Zelda. But Vaati was not dead. He made one final try to kill both of them and gathered all of his power, transforming into the Wind Mage Vaati, a form he would retain in the Four Swords games. Vaati was finally defeated and sealed away, and his cap was purified by Zelda.