From Zelda Dungeon Wiki
Jump to navigation Jump to search
Want an adless experience? Log in or Create an account.
Syrup 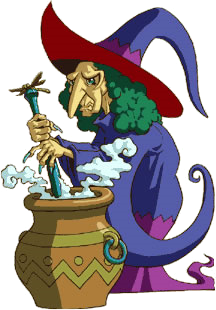 Syrup is one of the many reoccurring characters in The Legend of Zelda franchise. She is an old witch who brews and sells Potions. In most of the games, she has an apprentice named Maple, making them the duo of "Maple and Syrup".

Syrup is the Witch that can be found just outside the Magic Shop located at the northeast portion of Hyrule. She is the owner of the Shop and has a Hooded Shopkeeper serve as the Clerk. The Magic Shop sells Red Potion, Green Potion, and Blue Potion.

Link can acquire a Mushroom from the Lost Woods and give it to Syrup. After Link leaves the screen and then comes back to re-enter the Magic Shop, he will find Magic Powder waiting for him. Magic Powder can be used to change an Anti-Fairy to a Fairy, as well as changing a number of enemies into Slime creatures.

In the Game Boy Advance remake of A Link to the Past, Syrup's assistant is replaced by Maple.

In Link's Awakening, Syrup lives in a Hut in Koholint Prairie. She will also make Link Magic Powder, this time in exchange for a Sleepy Toadstool from the Mysterious Forest. Syrup does not have Maple as her apprentice in this game.

Syrup's abode is the Sunken City in Oracle of Seasons. This is located in the eastern quadrant of Holodrum. Link may only travel here during the Winter when the water has frozen and snow compiled to form a bridge. As part of the Trading Sequence, Link must trade Syrup the Mushroom he obtained from Talon atop Mt. Cucco in exchange for her Wooden Bird. Using the Mushroom, she is able to make her Magic Potion and open her shop.

Syrup is a witch who resides in Yoll Graveyard. Her hut, located in the north-eastern most corner, can only be reached once Link has obtained the Flippers and can swim across the path of water that surrounds it. Within her hut, Syrup sells Potions that Link can use to heal himself, as well as Gasha Seeds and a Piece of Heart.

Link eventually meets up with a sick King Zora at the Zora Village in the Past and must find some medicine to cure him. Though Potions can also be found in Gasha Nuts, purchasing from Syrup is going to likely be the quickest way to obtain one.

Syrup's occupation in The Minish Cap is selling Blue Potion. She will branch off her business and begin to sell Red Potion after Link locates a Forest Minish in South Hyrule Field and fuses Kinstones with it. Later in the game, a Wake-Up Mushroom is required to arouse the shopkeeper, Rem. Rem will subsequently craft the Pegasus Boots for Link allowing him to gallop across Castor Wilds.