This article is about the character in the Oracle games. For the mini-boss in Link's Awakening, see King Moblin. 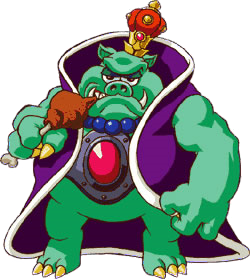 The Great Moblin is a character and Mini-Boss that appears in Oracle of Seasons and Oracle of Ages.

The Great Moblin resides in the Great Moblin's Keep, located at the peak of present-day Rolling Ridge. He and his moblin henchmen have stopped the Gorons from producing Bomb Flowers so they can greedily sell their own, home-made bombs.

In order to save the Goron Elder, who is trapped beneath a huge rock in the past of Rolling Ridge, Link has to defeat the Great Moblin and destroy his keep. After this, the Great Moblin flees Labrynna. If Link has not yet had his adventure in Holodrum, then the Great Moblin goes there and creates another Moblin Keep.