From Zelda Dungeon Wiki
Jump to navigation Jump to search
Want an adless experience? Log in or Create an account.
Vasu 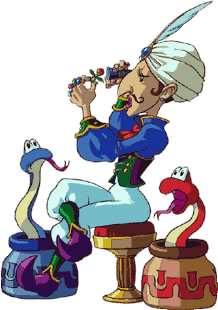 Vasu is a minor character in Oracle of Seasons and Oracle of Ages. He is a jeweler and owner of the shop called Vasu Jewelers. At his shop, he appraises Seed Rings and gives out Ring Boxes for free.

In Oracle of Seasons, Vasu is found in Horon Village. Upon meeting Link, Vasu gives him a Ring Box and the Friendship Ring.

Vasu is a Magic Jeweler who runs a Ring Shop in Lynna City, which is the only location in Labrynna where discovered Rings can be appraised for use. Upon meeting Vasu for the first time, Link is given the L-1 Ring Box as well as a Seed Ring which Vasu appraises for free. This Ring is revealed as the Friendship Ring, which purpose is only to show a sign of friendship and, other than that, has no other affect within the game. The L-1 Ring Box is used to hold one Ring which Link can take with him on his journey. The rest of the appraised Rings stay with Vasu at his shop where he keeps them until Link wants to exchange. Each additional Ring brought to Vasu costs 20 Rupees for appraisal. However, if Link already owns the Ring which is appraised, Vasu purchases it from him for 30 Rupees.

In his shop, Vasu has two snakes, one red and one blue. The Blue Snake is used for a Fortune Link, in which two Game Boy Colors must be linked up via a Link Cable. Through this method, players of Oracle of Seasons and Oracle of Ages can receive a new Ring on each game. The Red Snake's purpose is for Passwords. He tells Link a secret password that allows him to transfer all his Rings from Labrynna to the land of Holodrum in Oracle of Seasons.