From Zelda Dungeon Wiki
Jump to navigation Jump to search
Want an adless experience? Log in or Create an account.
Veran 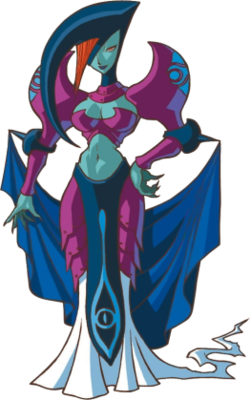 Veran, the Sorceress of Shadows, is the primary antagonist throughout Oracle of Ages. She has a unique ability that allows her to possess the bodies of others and force them to do things to her liking. Early on in the game, Link meets up with Impa within the Forest of Time. Link helps to move a block displaying the symbol of the Triforce on it which leads to an area where Nayru, the Oracle of Ages, is found singing. After speaking with Nayru, it is revealed that Veran was possessing the body of Impa just to get past the block and to Nayru. Veran then possesses the body of Nayru and uses her power to travel to the Past.

In the Past, Veran, posing as Nayru, uses her powers to alter the Present and influences Queen Ambi to build the Black Tower. Eventually, Link travels to the Past, engaging in a battle with Veran that would free the body of Nayru from her grasp. However, before Link can finish the job, Veran possesses Queen Ambi and quickly flees to the Black Tower.

After collecting the eight Essences of Time, Link's last stop will be the Black Tower itself, where Veran has taken refuge. Though Link is successful in freeing Queen Ambi's body from Veran, she desperately reveals her true form of a Turtle, a Bee, and a Spider to Link in an attempt to stop him. This would still prove no match for the legendary hero, as Veran would be defeated by Link. However, it is then revealed that Veran was nothing more than a pawn of Twinrova, whose ultimate goal was to resurrect the Evil Demon King Ganon. Veran's evil doings across the land of Labrynna would still light the Flame of Sorrow, one of three flames needed to complete the resurrection of Ganon.

Veran has the ability to take over the body of innocent people. Taking on the guise of a trusted person, she can easily manipulate people into doing whatever she desires. She does this to Link, asking him (in Impa's body) to move a stone between her and Nayru. She also possesses Nayru, and with the Oracle of Ages' power, she stops time in the Past and brings chaos and sorrow to the people of the land as they vanish or turn to stone. She uses Queen Ambi to build the Black Tower to fulfill her plans. If Veran is hurt while she is in someone's body, it is the possessed person who dies. Her only weakness are Mystery Seeds while in this form.

She can also take the form of a giant Winged Demon with the ability to fire balls of energy from her mouth.

Her true form, however, is one she utterly despises and only resorts to it in dire situations. At this stage, she transforms into a Turtle who generates great force when landing, a Bee who fires stingers at the target, and a shielded Spider with her face fully protected. She also turns the ground into acid for a short period of time.

The first time Link fights Veran, it takes place in Ambi's Palace after finishing Mermaid's Cave. In this battle, she possesses Nayru's body. She floats around the room before stopping to charge an attack. Her attack is shooting several orbs of energy in a circle around the room. During this time, Link can take out the Seed Shooter and hit her with a Mystery Seed. This separates Veran from Nayru, allowing Link to pull out the Switch Hook and switch places with Veran. Link can now slash at her with the Sword before she flies back into Nayru. After three hits with the Sword, Veran will be defeated for now.

The second and final battle with Veran takes place in the Black Tower. She is the final boss of the game, and there are a few stages before she is defeated. In the first stage, Link needs to repeat the first battle he had with her: shoot Mystery Seeds at her while she charges an attack, separate her from Queen Ambi with the Long Hook, and then hit her with the Sword. Be aware that she sends spiders after Link this time. Again, this stage ends after three hits. She now transforms into her true form, a Winged Demon, who flies in and out of the screen. To fight her, Link has to charge a Spin Attack and hit her with it as she flies across the screen. There are also several figures that resemble Dark Link that Link can defeat for Recovery Hearts. After defeating this form of Veran, Link witnesses a short cutscene before moving on to her final few forms. At this point, the battle becomes much less straightforward as Veran moves randomly through several different forms. One is a Turtle, which tries to jump on Link. Link can avoid this by jumping out of the way and then slashing at her head when it pops out. Another form is a giant Bee, which flies in a figure eight formation around the room and occasionally attacks Link by shooting stingers vertically across the room or sending smaller bees at Link. Simply attack this form using the Sword. The other form is a Spider that attacks Link by running into him or shooting a web at him, which Link needs to hit in the face with a Bomb before attacking with the Sword. After numerous hits, Veran will be defeated.