From Zelda Dungeon Wiki
Jump to navigation Jump to search
Want an adless experience? Log in or Create an account.
Spin Attack 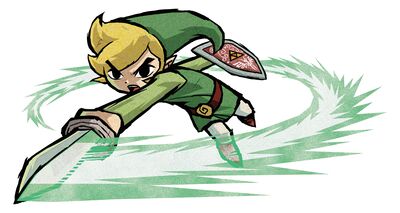 Artwork of Link performing the Spin Attack from The Wind Waker

The Spin Attack is a recurring sword technique in The Legend of Zelda series. To perform it, the player must hold down a button and release it. In a game that has a Magic Meter, they can hold down the button for a longer time to charge up their sword, and then release it to perform a more powerful Spin Attack.

In The Wind Waker, the Spin Attack is one of the many sword techniques taught to Link by Orca during the Sword Training. It is the fourth sword attack learned and is performed by holding 'B' briefly, and then releasing it. A quick spin could be performing by rotating the left stick, and then pressing B.[1]

In Skyward Sword for Nintendo Wii, the player must swing the Wii Remote and the Nunchuck horizontally or vertically to perform a Spin Attack. To perform a more powerful Spin Attack, they must charge their sword by raising it skyward beforehand.

In Nintendo Land attraction's Battle Quest, the sword-wielding player can use both horizontal and vertical Spin Attacks by charging the blade similarly to Skyward Sword.