The Adventure of Link Story

Hyrule was on the road to ruin. The power that the vile heart of Ganon had left behind was causing chaos and disorder in Hyrule. What's more, even after the fall of Ganon some of his underlings remained, waiting for Ganon's return. The key to Ganon's return was the blood of Link - the valiant lad that overthrew the King of Evil. Ganon would be revived by sacrificing Link and sprinkling his blood on the ashes of Ganon.

Meanwhile, Link remained in the little kingdom of Hyrule and lent his hand to its restoration. But circumstances did not look very good. One day a strange mark, exactly like the crest of the kingdom, appeared on the back of Link's hand as he approached his 16th birthday. The worried Link went to Impa, Princess Zelda's nursemaid, who was shocked and frightened when she saw the birthmark. When she regained her composure, she took Link to the North Castle.

There was a door in the North Castle called "the door that does not open." Only the descendants of the Impa family who served the king knew how to open the door. Impa took Link's left hand and pressed the back of it against the door. There was a sound of a lock falling open, the door slowly creaked open and there on an altar in the middle of the room lay a beautiful woman.

"Here lies the Princess Zelda." Impa began to speak calmly. "Link, the time has come when I must tell you the legend of Zelda handed down in Hyrule.

The King looking out over Hyrule

It is said that long ago, when Hyrule was one country, a great ruler maintained the peace in Hyrule using the Triforce. However, the king too was a child of man and he died. Then, the Prince of the kingdom should have become king and inherited everything, but he could inherit the Triforce only in part. The Prince searched everywhere for the missing parts, but could not find them. Then, a magician close to the king brought him some unexpected news. Before he died, the king had said something about the Triforce to only the younger sister of the prince, Princess Zelda. The prince immediately questioned the princess, but she wouldn't tell him anything.

The Magician, the Prince and Zelda

After the prince, the magician threatened to put the princess into an eternal sleep if she did not talk, but even still, she said nothing. In his anger, the magician tried to cast a spell on the princess. The surprised prince tried to stop him, but the magician fought off the prince and went on chanting the spell. Then, when the spell was finally cast, Princess Zelda fell on that spot and entered a sleep from which she might never awake. At the same time, the magician also fell down and breathed his last.

The Magician using a Spell

In his grief, the prince placed the princess in this room. He hoped that someday she would come back to life. So that this tragedy would never be forgotten, he ordered every female child born into the royal household should be given the name Zelda. From the stand next to the alter where Princess Zelda lay in a deep sleep, Impa took the six crystals and a scroll with the same crest and handed them to Link. "For generations, my family has been handed down these things which have been set aside for a time when a great king will come. They are written in ancient script that no one can read now. But you who have the crest may be able to read it. It is said that the key to uniting the Triforce is hidden there. Now it is time for you to read it." Link glanced at the scroll half in doubt, but what do you know? Although he never saw the letters before, he found that he could read them as if they were talking to him...

"This was written on the Scroll: "You who'll control the Triforce of the future. I shall hand down to you the secrets of the Triforce. There are three kinds of Triforce - Power, Wisdom, and Courage. When these three are brought together, the Triforce will share its maximum power. Of the three, I have left Power and Wisdom in the kingdom. But the Triforce of Courage I have hidden for a reason. Not everybody can use the Triforce. It requires a strong character with no evil thoughts. But an inborn special quality is also necessary. Unfortunately, I have not found such a person during my lifetime." "Therefore, I have decided to cast a spell on all of Hyrule. A crest will appear on a young man with that character who has been brought up correctly, has gained many kinds of experiences and reached a certain age. But, what will happen if someone else uses the Triforce before then? If it is misused, it will produce many evils." 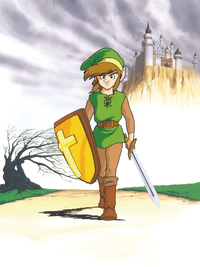 "The Triforce of Courage is hidden in the Great Palace in the Valley of Death on the largest island in Hyrule. However, to enter you must first fight the guardians and undo the "binding force". When you have defeated the guardians, which I made to prevent enemies from invading the six palaces in Hyrule, set a crystal in the forehead of the statue you find. When you have set crystals in all of the statues in the six palaces, the "binding force" placed on the Valley of Death will be removed and you will be able to enter the Great Palace. There you must fight the last guardian. And you can obtain the Triforce only by defeating that guardian. There's nothing to fear. You are the one to get the Triforce. You are the beacon of hope for Hyrule."

Impa implored Link, who raised his head slowly after reading the scroll. "The magic spell cast upon the Princess Zelda will sure to be broken if the Triforce is used. Please, Link. Unite the Triforce and save the princess. And bring back peace to Hyrule." Link nodded silently in approval, and left the room after taking a long glance at the altar. Then with a magical sword in his left hand and a magical shield in his right, he set off alone on his long travels. At that time, Ganon's underlings were calling up new allies from the Underworld, and were beginning to work devilishly towards the revival of Ganon.