From Zelda Dungeon Wiki
Jump to navigation Jump to search
Want an adless experience? Log in or Create an account.
Triforce 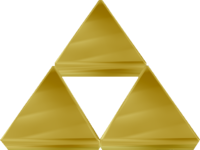 "The power of the gods... The Triforce! He who touches it will have whatever he desires granted!"

The Triforce is a recurring item in The Legend of Zelda series, as it is typically the item Ganon is trying to capture. The Triforce consists of three pieces. Each piece stands for a trait, namely, Courage, Wisdom, and Power. Each trait represents one of the three Golden Goddesses.

The Role of the Triforce

The Triforce is a huge source of power, sometimes referred to as the golden source of power. It combines the three parts of power, courage, and wisdom to create an earthly power. The one who possesses it gets his or her wishes granted to them, with no matter about their intentions. The Triforce plays many roles in Hyrule, even seen on the crest of the Royal Family, or the Royal Crest. Its dynamic power makes it inevitable. Although it may be seen as all-mighty and good, it might serve as a corrupted power after all. The Triforce is the reason for the wars, battles, and fights fought across Hyrule. This can be evidenced through the interactions of various Hylians and the tribes of Hyrule. Many of those that have wanted the Triforce are greedy and power-hungry, seeking much power. The sacred power of the Triforce was one of the reasons of major conflict, leading to an era of chaos. Because the power of the golden Triforce was so great, many people attempted to claim ownership. After many years passing, another bloody, horrid battle called the Imprisoning War occurred. When word of the Sacred Realm, the hidden location of the Triforce, broke out, civilians, being greedy and lustful, fought each other. Evil lords like Ganondorf the Gerudo King entered the Sacred Realm. Almost all the Knights of Hyrule were wiped out in the conflict. The Seven Sages, however, sealed the entrance to the Sacred Realm under the orders of the King of Hyrule. The Imprisoning War continues in the events of ‘Ocarina of Time’, but in a series of different events. The events that the Triforce has caused has ultimately re-shaped Hylian culture, life, and beliefs. It also led to the rise of Ganondorf, the King of the Gerudo Thieves. Although evil can wield the power, however, it is said that a Hero will always be there to battle him eventually.

As The Legend of Zelda series has expanded, so have the questions of how, where, and why the Triforce was created. The first information players got to answering these questions came from the Great Deku Tree in Ocarina of Time. After Link kills Queen Gohma, he will be warped back to the Great Deku Tree's Meadow, where the Great Deku Tree will tell the story of how the land of Hyrule was created. He gave players the first few pieces of information that would soon guide players to answering the aforementioned questions when he said, "The three great goddesses, their labors completed, departed for the heavens. And golden sacred triangles remained at the point where the goddesses left the world."[1][2] This answered the first questions many players had, which was how the Triforce was created. According to him, the Triforce was created when the goddesses left the earth, at the exact spot they left the world for the heavens. However, he does not say for certain if the goddesses intentionally created it, or it was a strange item that was formed when they departed. He also briefly touches on where they were created, when he says, "And, the resting place of the triangles has become the Sacred Realm."[3] This hints that the Triforce was created in the Sacred Realm, but does not 100% confirm it.

After Link has completed the Fire Sanctuary and traveled through the Gate of Time into the distant past, he will have the chance to talk with Zelda. She will explain everything that has happened throughout the game. Also, she provides players with the answers to all of the unanswered questions about the Triforce. She starts by saying, "The old gods created a supreme power that gave anyone who possessed it the ability to shape reality and fulfill any desire. They called it the Triforce."[4] This quote tells players what the Great Deku Tree did not; the Triforce was created by the goddesses. It was not left behind or created when they departed, it was created by them. Later on in her speech, she says, "It's impossible to know the true reason why the old gods created the Triforce."[5] With this quote, players understood that it is very likely that the true reason behind why the Triforce was created will never be told. However, Zelda will later explain her own personal theory as to why the old gods created it. She states they, the gods, created it in a way so it could never be used by their own kind.[5] She believes doing this was their way of giving hope to the mortals of the land.[5] This line is the closest players have gotten to figuring out why the Triforce was created and may be the closest they will ever come. 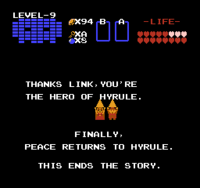 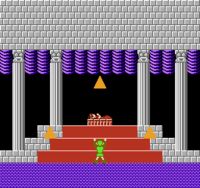 The Triforce as seen in The Adventure of Link

The Triforce of Courage is first introduced in the second game of the Zelda series. In order to keep the third part of the Triforce safe, the King of Hyrule placed it in the Great Palace, where it could only be obtained by one who could fight his way through six other palaces to break the magical seal left by the king. Guarded by a Triforce Keeper, the Triforce could only be recovered by a hero capable of defeating the soldiers and monsters set to guard the Great Palace and also their own inner demons. Link overcomes these obstacles to complete the Triforce and uses the power of the united item to wake the sleeping Princess Zelda. 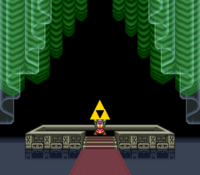 The Triforce as seen in A Link to the Past

The Triforce, also referred to as the "Golden Power", is for the first time spoken of as physical manifestation of the Goddesses' power. Bestowed upon Hyrule at the moment of their departure, it lies hidden in the fabled Golden Land until the evil thief Ganondorf broke the seal and entered the hidden land. Upon murdering his companions and claiming the Triforce for his own, Ganon used its power to turn the Golden Land into the Dark World. In the Dark World, a person changes into something that reflects their nature; Link is changed into a pink rabbit. Ganon is later sealed inside the Dark World by the Seven Wise men, but he uses Agahnim as a portal between the worlds and causes problems, but Link saves the day eventually and gets granted the wish from the Triforce. He uses this opportunity to turn the dark world into the golden land.

The child story arc focuses on the Spiritual Stones which are used as keys in order to enter the Sacred Realm where the Temple of Light is situated and holds the Triforce which the three Golden Goddesses left behind when they created Hyrule. Link acquires all of the stones and plays the Song of Time and unintentionally lets Ganondorf inside the Sacred Realm allowing him to cause chaos and become the King of Evil. Link pulls out the Master Sword and travels through time, he awakens the six sages and with the help of their power he defeats Ganondorf and seals him away, keeping the Triforce safe.

Although the game's story does not focus on the Triforce, there are cameos in the game with the Triforce appearing. The carvings on stones, Link's shield etc. Otherwise, there is no direct importance.

The Triforce plays a similar part in both Oracle games. At the beginning of both games, Link has been called by the Triforce and goes to the place it is kept. The Triforce tells Link of problems in the lands of Holodrum and Labrynna, the lands in which Oracle of Seasons and Oracle of Ages are set, respectively. Link is then teleported to these lands by the Triforce.

The Triforce as seen in The Wind Waker

Link must find the eight shards of the Triforce of Courage in order to regain access to Hyrule Castle, and to dispel the barrier blocking the path to Ganon's Tower.

The Triforce is reassembled by Ganondorf at the top of his tower just before the final fight. However, before Ganondorf makes his wish for Hyrule to return, Daphnes Nohansen Hyrule appears and makes his wish before him. This sends Ganondorf into a relentless rage against Link and Princess Zelda.

The Fishmen humorously refer to the Triforce as "Triumph Forks."

While the Triforce is visually referenced in such designs as the Royal Crest and Link's Small Shield, it is not mentioned in text and plays no part in the story.

The Triforce as seen in Twilight Princess HD

The Triforce does not appear in this game, but its symbols Courage, Power, and Wisdom are present in the three spirits. It also makes a cameo appearance in the Temple of the Ocean King.

The Triforce as seen in Skyward Sword

Near the end of Skyward Sword, Link must collect the Triforce from inside Sky Keep to free Zelda from a thousand-year sleep. Not many of the people from Skyloft know anything about the Triforce, it is a very unknown thing until the very end of the game.

The Triforce as seen in A Link Between Worlds

The Triforce makes a non-canonical appearance in Battle Quest, one of the 12 attractions that make up Nintendo Land, a release title for the Wii U. The Triforce is obtained at the end of every level and can be reacquired as many times as Link succeeds in reaching and defeating the Boss of the level without losing all of their hearts. This is obviously not part of the Zelda canon, as players learned in Skyward Sword that only a select few ― those with an unbreakable spirit ― can wield its might.[6] This "select few" obviously does not include Mii characters.

Also, it is worth noting that in Nintendo Land's description of Ganon, it states that he is a wielder of the Triforce, obviously hinting at the sequences of Ocarina of Time, when Ganondorf broke into the Sacred Realm and took the Triforce of Power.

The Triforce can be acquired as a furniture item in Animal Crossing: New Leaf from fortune cookies. When activated, it makes the animation seen at in the intro of A Link to the Past as well as "A Link Between Worlds".