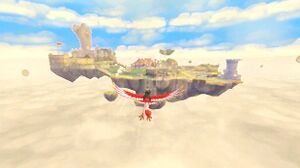 Skyloft is the main city, or hub, in Skyward Sword. Link was born and raised in Skyloft, along with Zelda. He attends the Knight Academy with her and several other students. The main attraction about Skyloft is that it is a series of floating islands.

Skyloft was created when demonic hordes rose from below the ground. In their attempt to take the power from Hylia, or Her Grace, they choked Hyrule of its beauty and prosperity. They caused terror and panic among the tribes. In a war with no end, Her Grace sent up a massive crop of land towards the sky. It was sent even higher than the visible clouds one can see. This crop of land, floating in the middle of nowhere, is known as Skyloft. The townspeople are completely unaware of the lands below the clouds. No one has proposed such a theory, yet Skyloftians appear afraid of what may lie below.

It is a massive floating island, one of the biggest seen so far in The Legend of Zelda series, and it is complete with a Bazaar, where Link can buy items and upgrade his weapons; a Knight Academy, where students train to become full-fledged knights; and the famous Statue of the Goddess. This Statue looks over the citizens of Skyloft, as it was built in honor of the Goddess. Link receives his first sword in the training hall, and the second sword of the game, the Goddess Sword, from inside this statue through an opening at the bottom. The Bazaar is open to a number facilities, where Link and other citizens can purchase potions, items, and repair tools. The Bazaar serves as a collection of general stores, a facility where anybody can come and go to purchase, trade, repair, and discuss. Its vibrant and festive atmosphere allures many citizens.

They also have their annual Wing Ceremony, in which they use Loftwings, a common bird race, to do various competitions. Loftwings are also the means of transportation Skyloftians use to traverse the Sky. Oddly enough, the game mechanics for Skyloft only allow Link to successfully jump off it at designated ramps. If a jump is attempted elsewhere, or incorrectly executed in general, Link will be unable to call his Loftwing and he then ends up being rescued by a Rescue Knight.