From Zelda Dungeon Wiki
Jump to navigation Jump to search
Want an adless experience? Log in or Create an account.
Shipyard 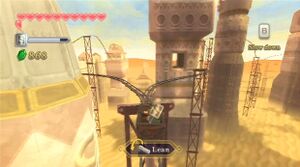 The Shipyard is a location present within Skyward Sword. It is located in the western section of the Lanayru Desert. This area is one of the various locations scattered about the Sand Sea that Link explores in his adventure to track down the Sandship.

After Link returns from Skipper's Retreat with no leads as to where the missing ship may be, Skipper suggests that the young hero searches through the Shipyard next, and with that said, he marks it on the map and the two of them depart. Upon arriving, Link quickly heads towards what appears to be a mine cart station, cutting down two Lizalfos in the process, and soon speaks with the Goron named Gortram positioned here. The young hero then hops into a mine cart and begins to speed through the area along the rails.

Upon arriving at the end of his ride, Link finds himself at another mine cart station, and after defeating some Arachas, he hops into yet another mine cart. This time around, the young hero limits the speed of his cart a few times though, for this track was much more dangerous than the previous one, and the last thing he wants is to fly off the rails. Soon, the young hero safely arrives at the end of his more lethal second ride, and is able to enter the Construction Bay positioned within Shipyard, which over time has now become a sand pit.

Fi states that using the Gust Bellows to blow away the sand may help find a clue in regards to the ship's location, so with that, Link begins to clear away the grit in hopes that he'd find something. After a while, some sort of rough black object begins to protrude out of the sand, and thinking it was something significant, the young hero kept clearing the sand away; however, what he was met with was a second Moldarach that had clearly set up its home in the large chamber.

Link quickly draws his blade to fend off the colossal scorpion, and after using the same tactics he used during the battle against the Moldarach he encountered in the Lanayru Mining Facility, came out of the battle victorious and quickly exited the building. Once back outside, the young hero returns to Skipper and explains about how there were no signs of his ship there either.