From Zelda Dungeon Wiki
Jump to navigation Jump to search
Want an adless experience? Log in or Create an account.
Sealed Temple 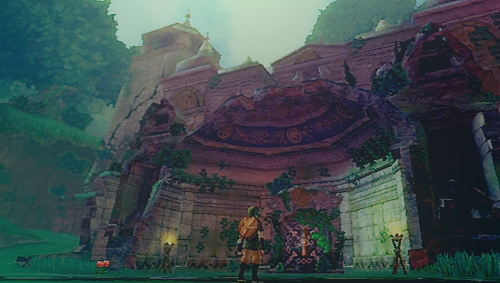 The Sealed Temple, formerly known as the Temple of Hylia,[1] is a location in Skyward Sword. Found in the Sealed Grounds, it is the resting place of the second and final[2] Gate of Time and the home of an old Sheikah woman.

After Link arrives at the Sealed Grounds during his first time on the Surface, he must use a Skyward Strike on the sealing spike at the base of the Sealed Grounds in order to remove the lock, which guards the entrance to the temple. Inside, he meets the old woman, who tells him about the destiny involving Zelda and him and where to find her.[3] In the corner of the room, there is a Treasure Chest that contains a Bottle filled with Revitalizing Potion.

When Zelda disappears into the gate at the Temple of Time and gives Link her harp,[4] Link returns to the Sealed Temple to consult the old woman. Once he defeats The Imprisoned outside of the temple, she teaches him the Ballad of the Goddess and the Gate of Time appears in the center of the temple. Link must then collect the Sacred Flames to empower the Goddess Sword, which in turn causes it to transform into the Master Sword.[5][6] Using the new found powers of the Master Sword, Link awakens the Gate of Time with a Skyward Strike and enters the world of the past.[7] 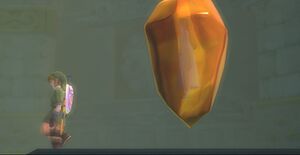 Zelda sealed inside the temple

With the Master Sword in hand, Link opens the Gate of Time and goes into the past, where it is now known as the Temple of Hylia. There, he talks to Zelda,[8] who blesses his sword to make it the True Master Sword and then seals herself in the back room.

During Link's quest to locate the Song of the Hero parts, he returns to the Sealed Temple with a Life Tree Seedling. He can plant it in the past after going through the Gate of Time, and then return to the future to obtain the Life Tree Fruit. The fruit revives Lanayru,[9] therefore providing him the ability to sing his part of the song.[10]

Once Link obtains the Triforce in Sky Keep, the Statue of the Goddess falls to the Sealed Grounds and destroys Demise. Zelda finally awakens and is reunited with Link, but then Ghirahim appears and takes her through the Gate of Time. Link must defeat Ghirahim and Demise in the past in order to save Zelda.[11]