From Zelda Dungeon Wiki
Jump to navigation Jump to search
Want an adless experience? Log in or Create an account.
Fire Sanctuary 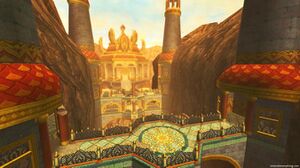 The Fire Sanctuary is the sixth Dungeon in Skyward Sword. It is located within the summit of Eldin Volcano which lies deep in the Eldin Province. Several puzzles involving water must be solved before gaining entrance to the dungeon. Scrapper is involved in the process of transporting the water. Several puzzles involving water-filled fruit, known as Water Fruit, and lava are contained within the first area of the dungeon, along with a Mini-Boss that cannot be defeated at the time, Magmanos.

The other puzzles throughout the dungeon makes use of several items contained throughout the game, including the Beetle and Gust Bellows on the way to finding the dungeon's own item, the Mogma Mitts. These upgraded Digging Mitts allow Link to burrow in certain soft soil spots, providing him with a wider range of skills. A new enemy is introduced through the use of the Mogma Mitts, the Moldorm, an enemy which has appeared in previous games. A puzzle involving the Sailcloth is kept in the deepest part of the dungeon, where there is another puzzle involving the Mogma Mitts and torches, where the dungeon's Boss Key, the Mysterious Crystals, are kept. The dungeon Boss, a second battle with Demon Lord Ghirahim, is now accessed. After the battle, Link gains access to the third Sacred Flame in the game, Din's Flame.