From Zelda Dungeon Wiki
Jump to navigation Jump to search
Want an adless experience? Log in or Create an account.
Blue Bokoblin 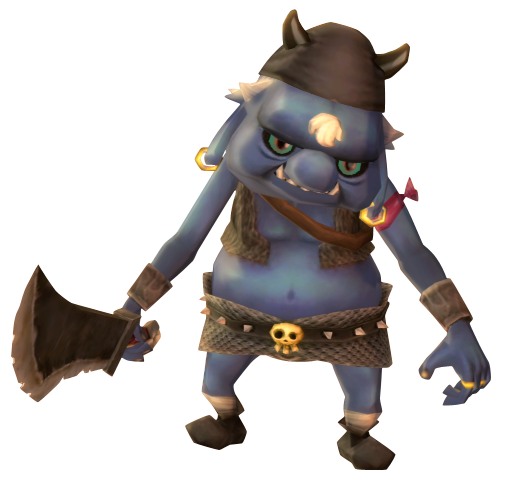 The Blue Bokoblin is a stronger variant of the standard Bokoblin, found in Skyward Sword and Breath of the Wild.

In The Wind Waker, the Blue Bokoblin are the base form of the Bokoblin and the most common. These enemies are often found not wielding any weapons or just a sword. If they drop their sword, they will pickup any nearby weapon they can find to attack Link with. The Blue Bokoblin is the very first enemy encountered in the game, found in the Forest of Fairies, at the top of Outset Island. They are commonly found throughout the game, appearing frequently in the Forsaken Fortress and Dragon Roost Cavern.

In Skyward Sword, during the first journey through the Faron Woods, Link will encounter a number of standard Red Bokoblin. After Link learns Farore's Courage at the Isle of Songs, he will need to return to the Faron Woods. This time many stronger enemies are encountered, including Blue Bokoblin.

The Blue Bokoblin behaves very similar to that of the Red Bokoblin, with the exception being that it has much stronger armor, and thus, will be able to take significantly more hits from Link. It's basic attack defense and attack pattern are familiar, where Link will need to move his to the side where the Bokoblin is not defending, and then swipe away to deal damage.

Blue Bokoblin have blue skin, due to them hailing from a different environment. However, like their Red and Green counterparts, they have the same fixation with exotic undergarments.[1]

In Breath of the Wild, Blue Bokoblin are stronger and more intelligent than their Red Bokoblin counterpart, as well as wielding slightly stronger Boko Weapon sets. They can be found using Spiked Boko Clubs, Dragonbone Boko Club, Spiked Boko Bat, Spiked Boko Bows, Dragon Bone Boko Bows, as well as many non-Boko based weapons. They are the second-tier of Bokoblin enemies, being weaker than the Black Bokoblin, Silver Bokoblin, and Golden Bokoblin.

If Link tosses a Remote Bomb towards a Blue Bokoblin, it will sense it as a threat, and will try to kick it away.[2] This shows their superior intelligence over the standard Bokoblin.

While Link will encounter Blue Bokoblins early on in his quest on the Great Plateau, these enemies are fund abundantly throughout Hyrule. They are usually found in small groups alongside other Bokoblin and Moblin, as well as on Horseback. They must often appear in the Lake Tower region, Faron Tower region, Gerudo Desert, and Gerudo Highlands. However, there are pockets of them all throughout Hyrule, where they appear in every single region of the game.

While regular Red Bokoblin will exclusively drop Bokoblin Horns and Bokoblin Fangs, the Blue Bokoblin have a chance to drop the slightly more uncommon Bokoblin Guts.

In Master Mode, the Blue Bokoblin become the default Bokoblin, replacing all of the Red Bokoblin. In turn, the existing Blue Bokoblin are all replaced with Black Bokoblin.

In Age of Calamity, Blue Bokoblin are common enemies, first appearing in The Battle of Hyrule Field. They generally wield weaker weapons, including a Boko Bow or a Boko Club. Larger Blue Bokoblin often appear as the heads of outposts. They generally have more health and must be defeated in order to take control of the outpost.

After each Blue Bokoblin is defeated, they may drop a Bokoblin Horn, Bokoblin Fang, or some Bokoblin Guts. Additionally, the player will receive a Bokoblin Trophy, which can be used to complete quests or upgrade weapons of the various warriors.