From Zelda Dungeon Wiki
Jump to navigation Jump to search
Want an adless experience? Log in or Create an account.
Lake Tower 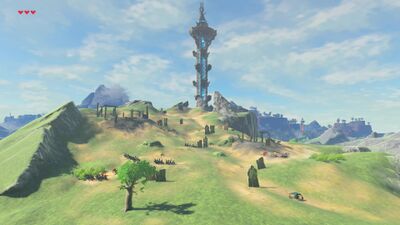 The area immediately surrounding the Lake Tower is filled with a variety of enemies, including Red, Blue, and Black Bokoblin, along with Green, Blue, and Fire-Breath Lizalfos. There are also a few Fire Wizzrobes that patrol the area. The tower is shown to have broken the hard ground from underneath, accounting for the several cracks surrounding it where monsters take hold. This is similar to the Hateno Tower, which also broke through solid rock, albeit breaking through a larger area. As most of the enemies are between the cracks, the shortest and safest way to reach the tower is to avoid said cracks by approaching it through the grassy areas.

Breath of the Wild Sheikah Towers[edit][hide][show]
Retrieved from "https://www.zeldadungeon.net/wiki/index.php?title=Lake_Tower&oldid=442392"
Category: