From Zelda Dungeon Wiki
Jump to navigation Jump to search
Want an adless experience? Log in or Create an account.
Ya Naga Shrine 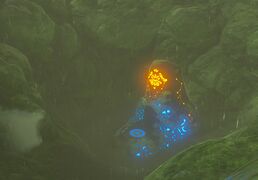 Ya Naga Shrine, also known as Shatter The Heavens, is one of the many Shrine of Trials from Breath of the Wild.

The shrine can be found on Hylia Island, which is located just west of the Bridge of Hylia within Lake Hylia.

The shrine may not be readily visible from afar because it's located in a depression in the middle of the island. The area has a handful of Lizalfos swimming and jumping between the islets.

Then place another spherical bomb into the tube, and stand on top of the block. Detonate the bomb and it will send Link way up to the air. At the apex of the jump, use the Paraglider to land on the column on the right side to get a treasure chest that contains an Eightfold Blade.

Head to the altar and talk to Ya Naga to get a Spirit Orb.