From Zelda Dungeon Wiki
Jump to navigation Jump to search
Want an adless experience? Log in or Create an account.
Rutile Lake 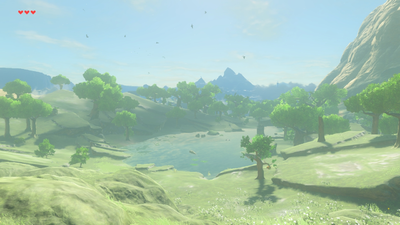 Rutile Lake is a small lake in Breath of the Wild.

The Rutile Lake is located in the Ridgeland Tower region, just southwest of Satori Mountain and northwest of the Dalite Forest. The lake is surrounded by a sparsely populated forest that has some Hearty Durian and Apple trees in the region.

While the Lake is deep enough to support fish life, there are no fish found within Rutile Lake. The area surrounding the lake is filled with Forest Octoroks that will attack Link when he draws near. Surrounding the lake there is a variety of vegetation, most notably there being several Courser Bee Honey hives in the area. 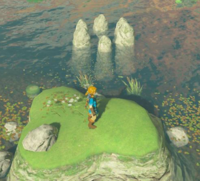 Throw a rock into the circle of rocks in the pond.

In the lake there are a circle of rocks. Stand on the nearby large boulder and throw a rock so it lands in the circle.

The two magnetic rocks are in the water and are also chained to each other. Use Magnesis to lift them up into the tree stumps one at a time.

Run through each of the flower bunches in order from least to most. To reach the fourth flower bunch inside the hollow tree surrounded by thorns you can burn away the thorns, or glide down from a nearby tree.

Run through the flower patches in the order of # of flowers. One is high up in a tree covered with thorns. Either glide from a nearby tree or burn away the thorns. 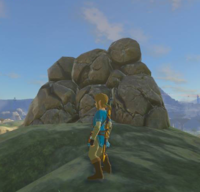 Bomb the first pile, then lift up the rock.

Hidden under a small rock that is covered by the leaves. 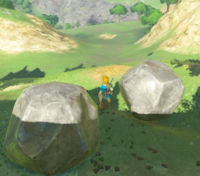 Roll a boulder (found to the north) into the hole.

Roll a boulder into the hole. It can help to use Stasis just when the boulder reaches the flat area and then push it in. 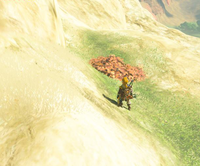 Use a bladed weapon to clear the leaves and then lift the small rock that was hidden underneath.