From Zelda Dungeon Wiki
Jump to navigation Jump to search
Want an adless experience? Log in or Create an account.
Mount Drena 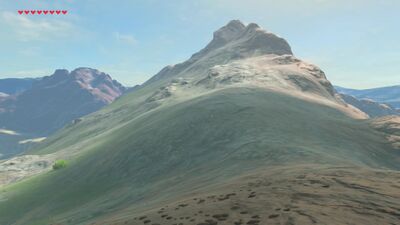 Mount Drena is a location found in Breath of the Wild. It is a long mountain ridge to the west of the Great Hyrule Forest, extending into Hebra.

Mount Drena is a mountain ridge found northeast of the Snowfield Stable and just east of the N. Tabantha Snowfield with two peaks - one in Central Hyrule, one in Hebra and a pass through the middle.

The northern, Hebra, peak overlooks the North Lomei Labyrinth to the northeast and is bitterly cold, and Link will need to wear armor with Cold Resistance in order to survive.

Just north of this peak of the mountain, there is a Bokoblin camp that has some Blue Bokoblin on the watch towers, and numerous Black Bokoblin huddled around a fire. The Bokoblin are protecting a treasure chest that holds five Ice Arrows.

At the peak of the mountain there are two boulders that Link can roll down the hill. Roll them to the southeast and they'll travel quite a ways before landing in a hole, where Link will find a Korok. A bit east of here, at a much lower elevation, there are some bombable rocks on the side of a cliff with a treasure chest behind it that contains a Hylia Series spear, such as a Knight's Halberd.

Throughout the mountain, there are numerous treasure chests that Link can find with a variety of goodies.

To the northeast of the peak, there is a block puzzle where Link can get a Korok Seed. Just south of there, Link will find a few inactive Guardians, as well as one Decayed Guardian that will come to life when Link draws near.

The southern peak, in Central Hyrule, has a Korok and chest containing a Hylia Series spear, such as a Royal Halberd on top. The weather in this area is temperate. 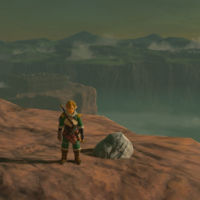 Pick up the rock on the peak of the mountain. 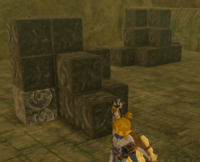 On top of the temple, use Magnesis to put the cube back in its rightful spot.

Roll a boulder (from uphill to the northwest) into the hole.

Roll a boulder into the hole. 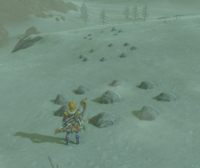 Complete the three circles, using the rock lying in one of the circles. 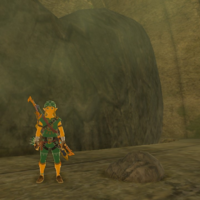 Inside the Forgotten Temple, behind the Goddess Statue's head, north of the shrine, lift the rock.

The entrance to the Forgotten Temple is far to the southwest. All the way at the very back of it, behind the Goddess Statue's head, lift the rock.