From Zelda Dungeon Wiki
Jump to navigation Jump to search
Want an adless experience? Log in or Create an account.
Zalta Wa Shrine 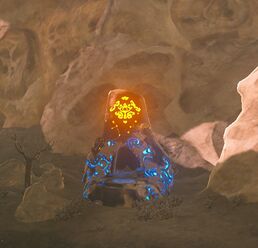 Zalta Wa Shrine, also known as Two Orbs to Guide You, is one of the many Shrine of Trials from Breath of the Wild.

The shrine is located within the Breach of Demise, right along the path, just southeast of the Ridgeland Tower.

Two Orbs to Guide You

To the right, shoot the orb with an arrow so it falls into the concave slot below it.

Grab the newly revealed orb and stand on the floor switch, then throw the orb into its concave slot.

Stand on the square platform by the shock switch. When you hit it, it will launch you up. Land on the moving platform above.