From Zelda Dungeon Wiki
Jump to navigation Jump to search
Want an adless experience? Log in or Create an account.
Gee Ha'rah Shrine 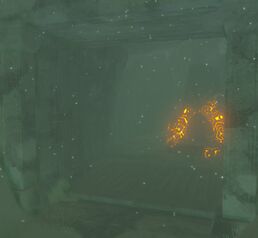 The Gee Ha'rah Shrine is one of the many Shrine of Trials from Breath of the Wild.

The shrine is behind a pair of giant stone doors at the southeast end of the Kopeeki Drifts. Link can climb up to the northwest of the drifts where there are a bunch of small snowballs. Here he can drop them into the channels, which will cause them to roll down the hill, getting larger as they go. If a large snowball crashes into the stone door, it will knock it down, revealing the shrine.

While facing the giant doors, place the snowball in the second channel from the left to get the ball directly to the doors.

It's not absolutely necessary for the channels puzzle to be solved, as giant snowballs on the bottom can be shot towards the door using Stasis.

In the first room, use a Bow to shoot the rope above the dangling ball, causing it to drop down on the button, opening the gate ahead.

Turn to the left and you'll find a ball that is hung up by two ropes. Shoot the rope on the left with an Arrow, which will cause the ball to swing and hit the button, opening the gate. Open the treasure chest to get a Diamond. If you broke the right rope you cant get the diamond.

On the other side of the shrine there is another ball that is held together by two ropes. Freeze the ball in the air with Stasis and then quickly cut down both ropes. If you dont use Stasis and broke the two ropes the ball will be stuck laying on the ground. You have to restart the shrine by leaving it. After the ball unfreezes it will hit the button and open the gate. Run ahead to the alter and speak with Gee Ha'rah to get a Spirit Orb.