From Zelda Dungeon Wiki
Jump to navigation Jump to search
Want an adless experience? Log in or Create an account.
Icefall Foothills 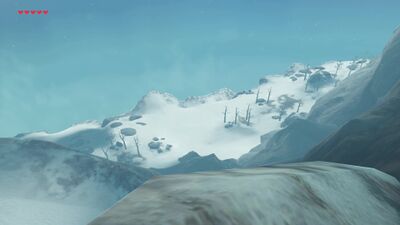 Icefall Foothills is an area in Breath of the Wild.

In the center of the a large Stalnox will appear at nighttime. During the daytime, its bones can be seen crumbled on the floor. Just to the southeast of the Stalnox, there are some Ore Deposits, with a Rare Ore Deposit found within the frozen ice.

There is a Korok that Link can get, just east of the shrine. Use Magnesis to grab the block so that the two block structures mirror each other..

There are two treasure chests up on the mountain, on the higher level south of the shrine. One can be found buried in the snow and it contains a Ruby gem. A second can be found behind some boulders a little bit up from there and it contains a Knight's Halberd. A third treasure chest is found at the very far end of the Icefall Foothills. Follow the path all the way eastward and then drop down further below to find some frozen ice blocks. Melt the ice to find a treasure chest that contains ten Bomb Arrows.

The Hia Miu Shrine is located in the area and it is A Major Test of Strength shrine. The Guardian Scout IV here wields a Guardian Spear++, Guardian Sword++, and an Ancient Battle Axe++. After defeating the guaridan, open the treasure to get a Sapphire gem, and then meet up with Hia Miu at the altar to get a Spirit Orb.