From Zelda Dungeon Wiki
Jump to navigation Jump to search
Want an adless experience? Log in or Create an account.
Pikida Stonegrove 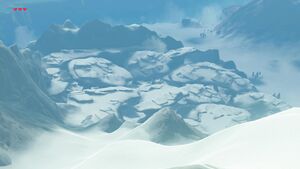 Pikida Stonegrove is a location in Breath of the Wild.

The Pikida Stonegrove is found at the higher elevation, northwest of the Snowfield Stable. The area consists of massive stones that hang overhead, giving the region two levels, the plateaus above the stones, and the area down below. The Pikida Stonegrove is bitterly cold and Link will need to wear armor with Cold Resistance, such as the Snowquill Set, to survive without taking damage. Additionally, there area is under perpetually snowfall, limiting visibility in all directions. Throughout the area there are numerous ice blocks and if Link thaws them out, he find several Korok Seeds.

On top of one of the higher stones at the east side of the Stonegrove, Link will find a Frost Talus. Link is unable to climb on top of a Frost Talus with his basic armor, as he will freeze. He can shoot the Frost Talus with a Fire Arrow, temporarily cooling him down so that he can climb up and fight the boss.

There a number of treasure chests in the region. Many are buried in the snow or trapped within ice blocks.

At the lower elevation, at the northwest part of the stonegrove, the Rok Uwog Shrine can be found. Using the Drillshaft that is found in the shrine, Link can complete the simple obstacles and meet up with Rok Uwog to get a Spirit Orb. 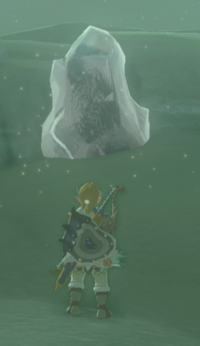 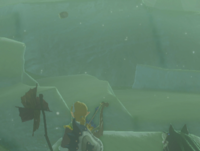 Stand near the pinwheel and shoot the acorn. Cold Resistance Level 2 recommended

Stand near the pinwheel and shoot the acorn flying in front of some ice to the west. 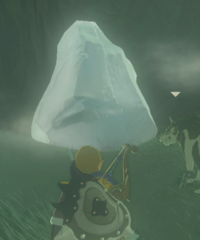