From Zelda Dungeon Wiki
Jump to navigation Jump to search
Want an adless experience? Log in or Create an account.
Nero Hill 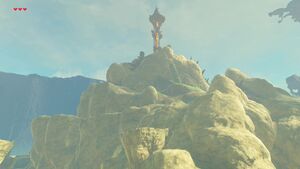 Nero Hill is a location in the Tabantha region in Breath of the Wild.

Nero Hill is located west of the Tanagar Canyon and the Tabantha Tower can be found at the peak of the canyon. There are steep elevations in all four directions of Nero Hill, but there is enough space for Link to easily climb up. As Link climbs the mountain, he'll encounter some Malice that will block his path. In some instances, there are Malice Eyeballs that Link can defeat, causing much of the malice in the area to disappear.

At the south base of the hill, Link will encounter some Blue Bokoblin and Black Bokoblin, along with a Cooking Pot. On the west side of the hill, Link will encounter a Black Moblin, a Black Bokoblin, and a Malice Eyeball. After eliminating the eyeball, the Malice will disappear, allowing Link to reach a rock that has a Korok underneath it. A Knight's Claymore can be found in the ground here.

Just to the southwest of the hill, there are a trio of Lizalfos, including a Blue Lizalfos, and a Black Lizalfos. Another Malice Eyeball can be found block the pathway leading up to the top of the hill. There is a treasure chest here that contains five Bomb Arrows.

At the very peak of the hill, the Tabantha Tower is covered in malice. Link will need to climb the pillar to the west of the tower and then shoot the Malice Eyeball to the north, which will cause that pillar to fall up against the tower. This creates a bridge that Link can climb where he can then reach the top of the tower.

Pick up the rock behind corrupted area. Shoot the eye to clear the Malice. And Link may need to clear some mobs.

Shoot the eye, pick up the rock. 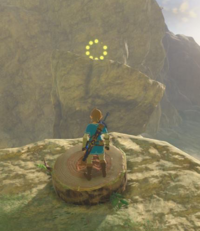 Reach the circle before the time limit. The seed platform is on the curved ledge to the southwest.

Race to the ring.