From Zelda Dungeon Wiki
Jump to navigation Jump to search
Want an adless experience? Log in or Create an account.
Zonai Ruins 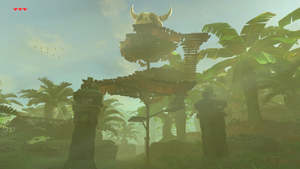 Zonai Ruins is a location in Breath of the Wild.

Zonai Ruins is a rather lush location found in the Lake Tower region. After traveling east along the path in the Pagos Woods, and then crossing over the Floria River on a small bridge, the Zonai Ruins can be found just to the north. While there are some initials structures found here, the Zonai Ruins are the entrance point to a series of ruins leading northward, throughout the Damel Forest, ending with the Spring of Courage.

There is a large Bokoblin tree house at the Zonai Ruins that spans quite the height. Numerous Red and Blue Bokoblin can be found here and at the very top of the base, there is a treasure chest that contains a Sapphire gem. Just to the north of the ruins, an Electric Wizzrobe can be found wielding a Lightning Rod.

Put a boulder on each of the three islands here. The boulders are magnetic, but two of them are chained together. Use Stasis to hold one of the chained boulders in place while you place the other.

In the river, you'll see three rock platforms. Two of them have boulders sitting on them. The third boulder is in the water, chained to another already on the platforms. Use Stasis on the chained one that's out of the water, then quickly use Magnesis to lift the one out of the water and onto the empty platform. This may take a few attempts, as the chain is short. 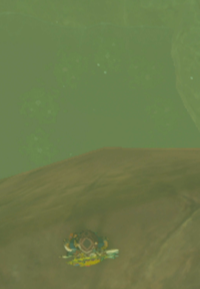 Dive into the ring of lilies.

Leap into the ring of flowers in the water.