"The Hebra province is located in northwest Hyrule. It is geographically isolated from the neighboring Central Hyrule by the enormous Tanagar Canyon, which cuts between the two areas from northeast to southwest and creates their shared border. The Tabantha Frontier in the southern tip of the region is a land of little grass, few trees, and exposed rock, while to the north are the Hebra Mountains - a frigid range with high elevation and low temperatures. Rito Village is located in Hebra, but that is the only large settlement in a region of few inhabitants and fewer travelers." 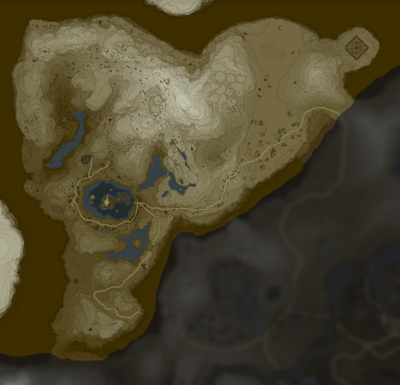 Hebra is a province found in Breath of the Wild. Set in the northwest, it is largely divided from the rest of Hyrule by Tanagar Canyon. The northern parts, the Hebra Mountains and Tabantha Tundra, are extremely cold and sparsely populated. The southern part, Tabantha Frontier, has a more temperate climate, although still requires cold protection at times. The latter area is where Rito Village is located. Its neighboring provinces are Central Hyrule to the southeast and Gerudo to the south.

The northern part is noted for its abundance of megafauna including Tabantha Moose, Great-Horned Rhinoceros, Grizzlemaw Bear and Cold-Footed Wolves, which alongside Snowcoat Foxes, yield high-quality meat when slain.

Road access from the south at the Tabantha Great Bridge is extremely risky, as there are two Guardian Skywatchers on the trail immediately after the bridge, between Piper Ridge and the Ancient Columns. As such, climbing the mountain to the Columns to avoid the trail is recommended, or simply approach Rito Village from the northeast with cold protection.

Breath of the Wild Key Locations[edit][hide][show]
Retrieved from "https://www.zeldadungeon.net/wiki/index.php?title=Hebra&oldid=303005"
Categories: