Eldin (Breath of the Wild)

"Eldin is located in the northeast of Hyrule. This scorched terrain extends out from its volcano Death Mountain center. It is so hot that simply placing objects on the ground is enough for them to burst into flame. If a non-Goron is going to explore this place, preparation is required. Following Eldin Canyon will lead one into Goron City, home of the Gorons. Along the way is the Southern Mine, where members of the Goron Group Mining Company are excavating ore." 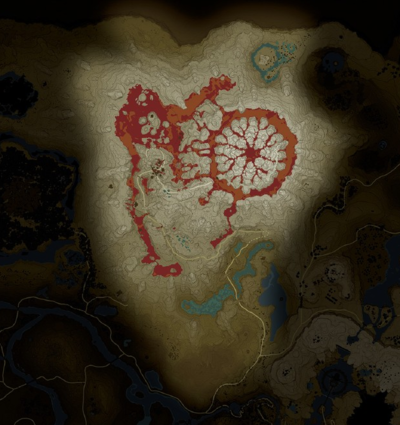 Map from Creating a Champion p293

Eldin is a province found in Breath of the Wild. Large parts of it are inhospitable to non-Gorons owing to the extreme temperatures created by volcanic activity, with open magma flows from Death Mountain forming lava lakes such as Darunia Lake and Lake Darman. Its neighboring provinces are Akkala to the east, Lanayru to the south, and Central Hyrule to the west.