From Zelda Dungeon Wiki
Jump to navigation Jump to search
Want an adless experience? Log in or Create an account.
Gerudo Canyon Stable 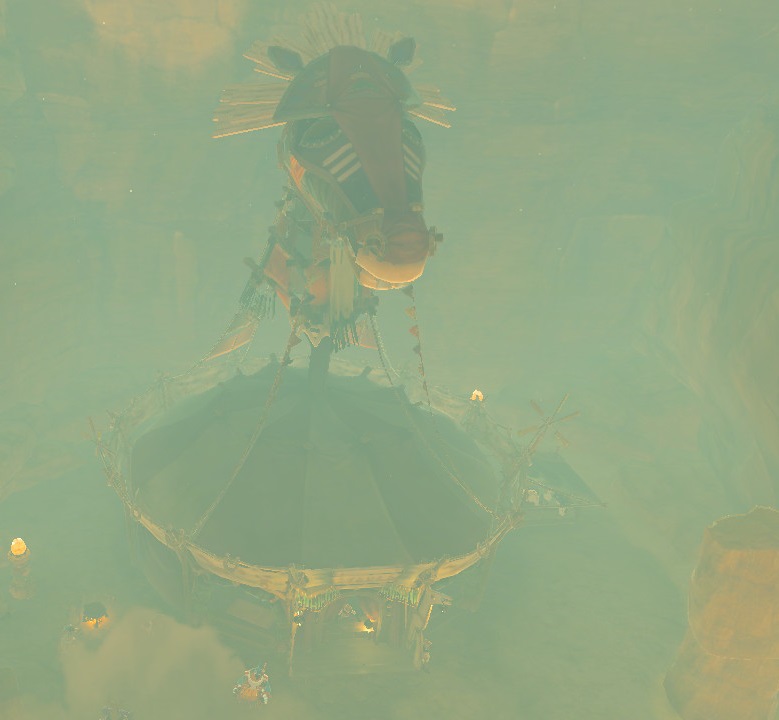 The Gerudo Canyon Stable is a location from Breath of the Wild.

Chilly Mushroom Risotto: Grants mid-level heat resistance. The tantalizing aroma of mushrooms and butter beckons you to the table.

Link can speak with Sesami at the stable to begin the Missing in Action quest. Sesami's four friends, Oliff, Flaxel, Canolo, and Palme where all attacked near the Koukot Plateau. Sesami escaped and ran to the stable, but he's worried about his friends. He tasks Link with finding them and letting them know he's at the stable. After Link travels to the Koukot Plateau and defeats the Blue Bokoblin that are attacking Sesami's friends, they will all reunite back at the stable. As a thanks, they will collectively give Link a Gold Rupee as a reward.

Link can speak with Pirou at the stable to begin the Rushroom Rush! quest. Pirou wants Link to bring him 55 Rushrooms and in return, will point Link towards a nearby treasure chest that contains a Diamond. Link can later bring Pirou 55 more Rushrooms, where he will purchase them for double the normal rate.

The Kay Noh Shrine can be found just south of the shrine on top of the hill. Titled the Power of Electricity, the shrine will require Link to use Electric Orbs to power up various objects, causing doors to open and conveyor belts to operate. Link will also need to use Magnesis on objects, passing electricity from object to object to solve puzzles. Link will meet with Kay Noh at the end of the shrine to get a Spirit Orb. 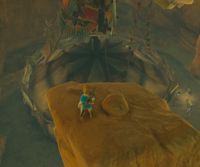 Climb the thin rock pillar next to Gerudo Stables, and lift the rock.

Climb the tallest rock pillar in front of the stable and pick up the rock.​ 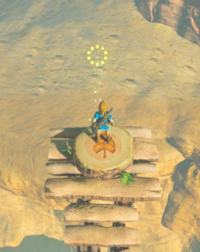 Climb up to the seed platform on the wood platform high above the chasm to the east, then race to the seed. The ring disappears quickly, so save before you attempt it. Run and jump off the platform, open the paraglider immediately, glide until you are above the ring, then drop.

The seed platform to activate the ring timer can be found at the top of the cliffs heading directly northeast from the stable (away from the Gerudo Desert). It is roughly halfway between the two nearest rock bridges that cross the road on the cliff tops to the south (opposite from the stable side of the pass). The seed platform is very high and across the chasm from where the seed itself is, so saving before you attempt is recommended so that you can just load your save instead of climbing up again.

Breath of the Wild Key Locations[edit][hide][show]
Retrieved from "https://www.zeldadungeon.net/wiki/index.php?title=Gerudo_Canyon_Stable&oldid=376126"
Categories: