From Zelda Dungeon Wiki
Jump to navigation Jump to search
Want an adless experience? Log in or Create an account.
Canolo 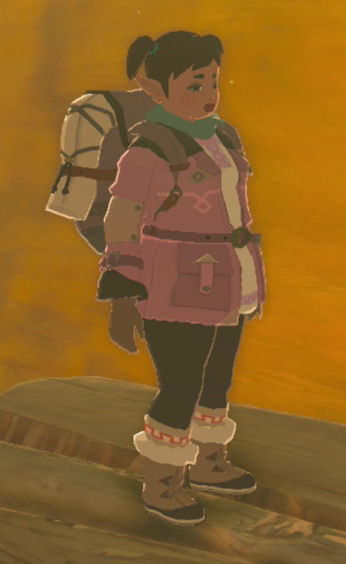 Canolo is a character in Breath of the Wild.

Canolo a traveler who sticks together with his four friends, Sesami, Oliff, Flaxel, and Palme. Initially she gets attacked by some Blue Bokoblin, along with several of her friends near the Koukot Plateau. However, after she is rescued, she will appear at the Gerudo Canyon Stable. She remains there resting by the Cooking Pot, stating that adventuring just isn't for her. She's going to head back home once she's ready.[1]

Near a torch by the road, just north of the Koukot Plateau, Link is able to climb up some of the wooden planks. Here he will find Canolo being attacked by a Blue Bokoblin. After Link saves Canolo, she is at first confused on how she was saved.[3] She is quite upset with Sesami, who just left her and her friends for dead after the Bokoblins attacked.[4]

Canolo will then appear at the Gerudo Canyon Stable. After Link has saved Oliff, Flaxel, and Palme, Link can speak with Sesami once again to complete the quest. The five of them each pitched in to give Link a Gold Rupee. After Link leaves the stable, Canolo and her friends will all leave the stable as well, with the exception of Sesami.