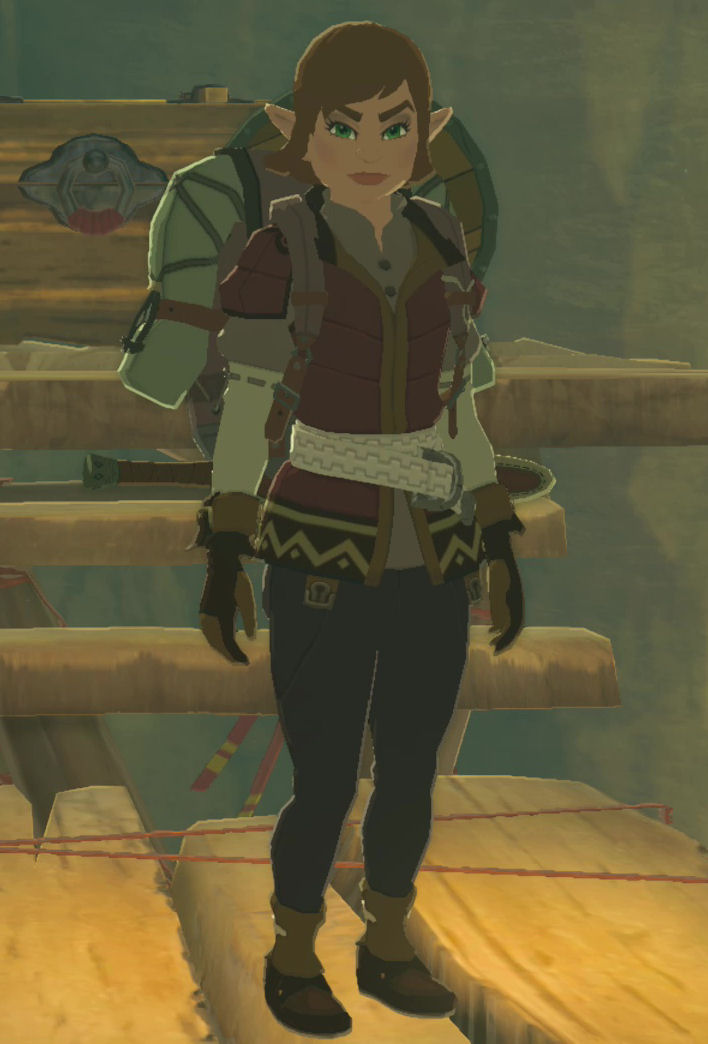 Flaxel is a character in Breath of the Wild.

Flaxel traveler who sticks together with her four friends, Sesami, Canolo, Oliff, and Palme. Flaxel can be seen wielding a Traveler's Sword and a Hunter's Shield. Initially she gets attacked by some Blue Bokoblin, along with several of her friends near the Koukot Plateau. However, after she is rescued, she will appear at the Gerudo Canyon Stable. She can be found sitting beside the Cooking Pot. When spoken to, she will comment that while she initially upset with Sesami for abandoning her, she realizes he was just scared and that she can't stay mad at him.[1]

Near a torch by the road, just north of the Koukot Plateau, Link is able to climb up some of the wooden planks. Flaxel can be found at the very top of these wooden planks, near the looking just north of the Koukot Plateau, where she is being attacked by a Blue Bokoblin. After she is saved by Link, Flaxel will thank him while also being agitated that Sesami abandoned her. After hearing that Sesami is waiting for her, she will run off towards the Gerudo Canyon Stable.[3][4]

Flaxel will then appear at the Gerudo Canyon Stable. After Link has saved Canolo, Oliff, and Palme, Link can speak with Sesami once again to complete the quest. The five of them each pitched in to give Link a Gold Rupee. After Link leaves the stable, Flaxel and her friends will all leave the stable as well, with the exception of Sesami.