The Adventure of Link Characters

This is a list of characters found in The Adventure of Link.

Main article: Link (The Legend of Zelda)#The Adventure of Link

As Link decided to stay in Hyrule after slaying Ganon, one day a mysterious mark appeared on his 16th birthday. It was the mark of the Triforce. After Impa saw this and told him legend behind the Triforce and of Hyrule, Link was destined to wake the sleeping Princess Zelda I and retrieve the Triforce of Courage in the Great Palace.

The princess of Hyrule. Zelda had a spell cast upon her to put her in a very deep sleep since she would not speak on the location of the Triforce. Impa shows Link the situation, making him have to go on a journey to receive the third piece of the Triforce. Only the complete Triforce would wake her from her eternal slumber. 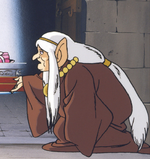 Impa is Zelda's nursemaid. Impa is the one that showed Link his destiny about the Triforce and gave him the six crystals and a scroll to venture the six palaces. After he puts the six crystals in the six well-guarded palaces, Link must go to the Great Palace and recover the Triforce of Courage.

After the king died, the Prince was to become king. However, he only got a part of the Triforce. Only Zelda knew where the other parts of the Triforce were, so he questioned her. She would not talk, so he had a magician who was close to the king make her talk. Shocked, the magician put a sleeping spell on her. In his shame, the Prince of Hyrule locked the sleeping Zelda away in North Castle, and sentenced that every girl born in the royal house from that point will be named Zelda.

Ever since Link defeated Ganon a few seasons earlier, some of his minions still remained. Ganon can only be revived if the blood of Link is shed on his ashes. Throughout Link's journey, Ganon's minions are constantly after him.

Before the King of Hyrule passed away, he left the Triforce of Power and Wisdom in the palace of Hyrule. However, he had other plans for the Triforce of Courage. Not even his own son was worthy of holding all three parts. One day a hero would be chosen in taking it from the Great Palace.

A total of eight Wise Men can be found throughout Hyrule. One is found in every town. They teach Link a new Spell every time he finds a new one.

Two Knights can be found in Hyrule. Both are found in different towns. They both teach Link a new sword technique: The Jump Thrust and the Downward Thrust.

Found in each of Hyrule's towns, Healing Ladies restore Link's life when he is injured.

With the exception of Rauru, an elderly woman clad in orange resides in every town and restores his magic power when he stops by her house.

Bagu lives in the woods near the Water Town of Saria. You need to talk to him first before the guard in Saria lets you cross the river.

Error is found in the town of Ruto. He will tell you the phrase "I am Error" until you speak to one of his friends in Mido. Talk to him again after you do that and he'll give you some advice.

The Kidnapped Child can be found somewhere on Maze Island. When he is found, take him to the town of Darunia in eastern Hyrule to get the Reflect Spell.

In Darunia, a mother informs Link that her child has been kidnapped and taken away to Maze Island.

In the Hidden Town of Kasuto, a woman keeps the final Magic Container. She will give it to Link if he has already collected the other three.

A young woman in the Water Town of Saria has lost her Mirror. Should Link find and return it to her, she will let him see the Wise Man that teaches him the Life Spell.

The Town Guard in Saria decides on who can cross the river. He lets Link cross the river after Bagu gives Link credentials to show the guard that he knows him. Doing this will grant Link access to Death Mountain.

A woman in Mido needs medicine for her sick daughter. Should Link venture to the Moruge Swamp and retrieve the Water of Life, he will be able to meet the Wise Man and learn the Fairy Spell.

A young lady in Nabooru is in need of Water. If Link brings her some from a local fountain, he will learn the Fire Spell.

Every town is filled with anonymous villagers going about their lives as Link passes through. Many have no useful information, but others provide useful clues regarding the location of Palaces and treasure.

The Wise Man of Rauru's daughter invites Link into her home. Inside, he meets the first Wise Man of his quest who teaches him the Shield Spell.

In Ruto, Link meets the Wise Man's Niece, who informs him that the town's Trophy has been stolen. Once returned, Link learns the Jump Spell.