Death Mountain (The Adventure of Link)

From Zelda Dungeon Wiki
Jump to navigation Jump to search
Want an adless experience? Log in or Create an account.
Death Mountain 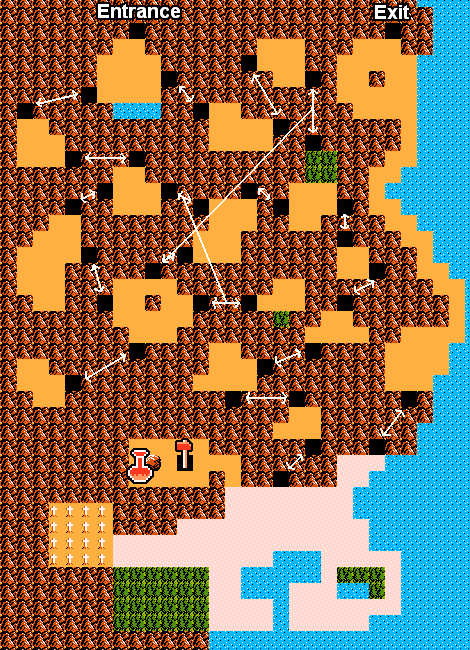 This article is about the mountain range in The Adventure of Link. For other uses, see Death Mountain.

Death Mountain is a mountain range, found in the southwest corner of Western Hyrule The Adventure of Link.

After finding Bagu in the forest, Link can show his note to the River Man, located in the Water Town of Saria. He will then extend the bridge, allowing Link to leave the town at the other exit, appearing on the south side of the river. Link can travel south from here to enter Death Mountain.

Death Mountain consists of a series of caves that serve as a maze. Link can oftentimes find himself going in a circle or even reaching dead ends if he doesn't properly know the way through the mountain. The area is littered with enemy Dairas, Octoroks, and Bago-Bago. Some of the enemies, in particular the Orange and Red Dairas, are significantly more difficult than any enemies Link has encountered up until this point. With Link be able to travel to Death Mountain almost immediately after the first level, Parapa Palace, Death Mountain is considered one of the most difficult locations for Link to tackle.

When Link makes it through the maze, he'll find himself at the desert, at the south end of the maze. It is here where he can enter a cave to the left, and deep within the cave, he will find the Hammer. After leaving the cave, Link can use the Hammer to break the boulder nearby, claiming the Magic Container that is found inside.

Route Through the Maze