From Zelda Dungeon Wiki
Jump to navigation Jump to search
Want an adless experience? Log in or Create an account.
Boulder 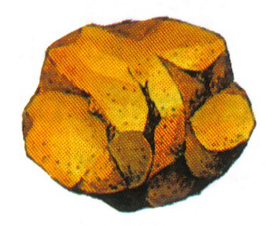 Boulders are recurring traps in The Legend of Zelda series. They usually fall from above on to Link to damage him. There is no way to defeat boulders so they must be simply avoided.

Boulders are found in the mountainous regions at the northern part of the overworld. They tumble down Death Mountain, dealing a half heart of damage if they make contact with Link.

In A Link to the Past, boulders appear in an almost identical fashion as they do in The Legend of Zelda. They appear exclusively in the mountainous region of Death Mountain. Often accompanied by Deadrock, boulders can be quite difficult to avoid without taking some damage.

Boulders are found at the northwestern part of Koholint Island, near the entrance to Turtle Rock. Boulders fall from the top of the screen and bounce around the mountainous terrain. Avoiding these boulders is only challenging if Link is trying to climb a staircase. There is no way to defeat a boulder. It may be fastest to get hit on purpose and continue on Link's way, instead of trying to dodge them. Luckily, boulders only do half a heart of damage, so Link is not in danger of dying unless his hearts are very low.

Boulder from Ocarina of Time

Boulders also freely roll around several places - including the area of Kokiri Forest where Link obtains the Kokiri Sword; and in multiple rooms in the Fire Temple itself - and hurt Link if they roll into him. In the Fire Temple, they also fall from the ceiling during the boss fight with Volvagia.

Otherwise, stationary boulders appear in many areas in the overworld. They do not really move at all, acting like resilient obstacles, sometimes blocking paths - as at Zora's River - or Secret Grottos from access. Reddish boulders can be destroyed with bombs or the Megaton Hammer, grey boulders can be lifted with the Silver or Golden Gauntlets.

Boulders are found on Restoration Wall near Symmetry City. They fall from holes at the top of the wall and try to hurt Link when he is climbing it. They can be quite pesky, especially if Link has lower heart levels. Link must try to steer out of the way to avoid these boulders since he cannot defeat them.

Boulders appear on Mt. Crenel. They rain down on top of Link while he is on the climbing wall. They can be difficult to dodge due to an erratic bouncing pattern.

In Battle Quest, boulders first appear on the Road to the Goron Mines, rolling down slopes. They are especially dangerous since they are packed with explosives. The explosives must be struck by the archer before reaching Links in order to avoid damage.

Boulders appear in The Faces of Evil in largely the same fashion as their The Wand of Gamelon counterparts.

Boulders appear in multiple variations, but they all serve the same basic purpose. They'll fall from up top with the intent of trying to harm Zelda. Most boulders fall randomly, so just be weary, keeping a quick reaction time once you see one appear. They often appear in bunches and can be hard to avoid as they fall rather quickly. Boulders are endless and there is no way to defeat individual ones, so just try to avoid them so you do not take damage.