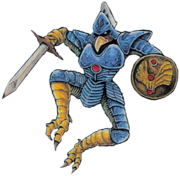 Fokka, also known as Bird Knights, are enemies that appear exclusively in The Adventure of Link. They were never given an official name in the English localization of the game. They are humanoid bird warriors that are only found in the Great Palace. They behave similarly to Iron Knuckles and deal extreme amounts of damage. They have a very high health allowing them to survive the Thunder spell, plus a few extra hits. Fokka can shoot beams from their swords, and can also jump around at incredible speeds. Their ability to jump makes it harder for Link to get away, for they can follow him up large steps. Link can use the Upward Thrust when they are jumping over his head, and he should be able to land a few good hits.