From Zelda Dungeon Wiki
Jump to navigation Jump to search
Want an adless experience? Log in or Create an account.
Leever 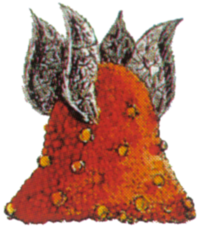 Leevers are recurring enemies in The Legend of Zelda series. They are sand-based enemies, and thus are usually found in deserts, like the Desert Colossus and the Gerudo Desert. However, they can also be found in Hyrule Field in Twilight Princess.

Leevers are huge spinning creatures that pop out of the ground in circles and spin toward Link. They are a pain to avoid and even harder to defeat. When they first appear, they begin moving toward the direction Link travels. Use this advantage and either zig-zag as they appear or change the direction Link travels shortly after they appear. Link can also get on top of rocks to keep them from attacking. A large purple Leever appears after defeating ten Leevers, which drops large amounts of Rupees when defeated.

In The Minish Cap, Leevers can be found in the Wind Ruins and Veil Falls. They come in two varieties, red and blue. They are easily defeated with sword strikes.

In Twilight Princess, Leevers are small, green monsters that pop out of the ground in packs. They attack by ramming into Link simultaneously. Leevers can be defeated by running over them while on horseback, or shooting them with a long-range weapon. It is also quite effective to perform a Spin Attack when a group closes in on Link. They are fairly simple enemies, and act more as an obstacle rather than a threat.