From Zelda Dungeon Wiki
Jump to navigation Jump to search
Want an adless experience? Log in or Create an account.
ReDead 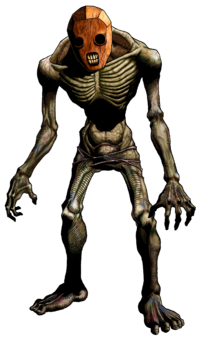 ReDeads are recurring enemies in The Legend of Zelda series. They emit a high-pitched scream and freeze Link in his tracks. While Link is frozen, they grab hold of him, and drain his health. A highly similar enemy, called a Gibdo, has appeared in many Zelda games.

ReDeads make their debut appearance in Ocarina of Time. Their appearance is very similar to that of a zombie. When Link approaches a ReDead, it emits a scream, immobilizing him temporarily, giving them a chance to jump on his back and start damaging him. This can damage Link greatly in a short amount of time, dealing half a heart of damage roughly every half-second. If this happens, the best way to escape is to rapidly press the A button to try and get out of its grip. They take several hits to defeat.

ReDeads also appear in Hyrule Castle Town after Ganon conquered the kingdom, suggesting that they were once villagers who couldn't escape the town when Ganon took over.

ReDeads can be stunned with either Deku Nuts or the Sun's Song, both which act as great weapons against them.

ReDeads appear once again in the sequel to Ocarina of Time, Majora's Mask, and they attack the same way. However, they only attack Link in his Hylian or Zora forms. The reason for this is since Zora Link is so much like Adult Link, from Ocarina of Time, the animation for ReDead attacks was already done. Because the animation for an attack on Deku or Goron Link was not completed, the ReDeads would still screech, but they would not attack either of these two forms.

There are several ways Link can defeat a ReDead. He can stun them with Deku Nuts or spin into them while wearing the Deku Mask, preventing them from attacking him. A Goron Pound is quite effective against them, as well as Zora Link's magic power. An even simpler way, however, is to just shine light on them using the Mirror Shield, which defeats them instantly.

If Link wears either the Captain's Hat, the Garo's Mask, or the Gibdo Mask, they start to dance around, in which case they do not attack him, no matter how many times he attacks them. They usually drop quite a significant amount of Rupees when defeated, so Link can use this to his advantage to stock up. If Link shoots a Gibdo with a fire arrow, they are revealed to just be ReDeads wrapped in cloth.

ReDeads in The Wind Waker are pretty much exactly like their Ocarina of Time counterparts. They attack by screaming, which immobilizes Link momentarily, giving them the perfect opportunity to jump on his back, dealing tons of damage in the process. Link can defeat them fairly easily, however, as just a few sword slashes do them in. If he shoots them with the Bow, Boomerang or Hookshot, they just creepily stare at him. Link can actually stun a ReDead with the Mirror Shield, if there is a light in the room. This does make them significantly easier to defeat.

ReDeads are found in the Earth Temple, Savage Labyrinth, Mrs. Marie's cabana on Private Oasis, the The Wind Waker and several mini dungeons around the Great Sea.

The ReDeads in Twilight Princess are known as ReDead Knights and have many significant differences from that of standard ReDeads. They are much larger than ReDeads in any other games. Rather than attacking by jumping on Link's back, this variety screams at him, then hits him with a large sword, dealing a significant amount of damage in one hit.

ReDeads also make an appearance in the Nintendo 3DS title, Tri Force Heroes. They appear in the Lone Labyrinth and the Grim Temple, of the seventh area of the game, The Ruins. They once again attack by screaming at their victims to immobilize them for a short time and jumping on their backs to suck the life out of them. However, in this game, ReDeads no longer have legs, but instead, a partially melted body that slides around, similar to Dead Hand. To attack, the ReDead first must be stunned by the Gust Jar, Gripshot, or Fire Gloves. If not stunned they will bury themselves into the ground and dodge the attack.

ReDeads in this game have an appearance similar to those in Ocarina of Time and The Wind Waker combined. ReDeads once again wear masks, have dark brown bodies, along with ear-hooped earrings. Their screams are the exact ones from Ocarina of Time and Majora's Mask.