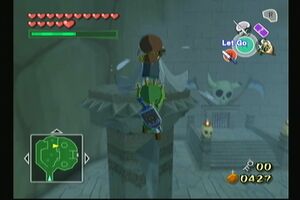 Link and Medli inside the Earth Temple

The Earth Temple is the fifth Dungeon in The Wind Waker. This dungeon is located behind a large stone on Headstone Island. This stone can only be moved using the Power Bracelets, which Link acquires on Fire Mountain. During the entire duration of the dungeon, Link is accompanied by Medli, the newly awakened Sage of Earth.

The Earth Temple was originally located in Hyrule, but when the Gods flooded the kingdom due to Ganon's rise, the entrance to the temple was buried away. However, there was an entrance built high atop a mountain, blocked by a large stone tablet. On this large tablet, he finds directions for the Wind Waker written on it. The directions are for a song known as the Earth God's Lyric, which can be used to awaken the next Earth Sage. After playing this song, Link meets Laruto, the previous Earth Sage. Laruto tells Link to use the song to awaken her succesor; Medli.

Once Link travels to Dragon Roost Island, plays the song to Medli, and returns to the temple with Medli, they enter the dungeon, wherein they must work together to make their way through the dungeon. Medli has the ability to fly and carry Link to high up places, and she can also use her harp to reflect light. The item of this dungeon is the Mirror Shield, and it is received after defeating three Stalfos. Link must use it to solve light puzzles, and sometimes use it combined with Medli's harp to form intricate highways of light. Some time through the dungeon, Medli may be captured by Floormasters and forced into a cage, which she can then fly out of.

The boss of the dungeon is Jalhalla, a large Poe. Link must defeat him using the Mirror Shield and Power Bracelets. Once he has been defeated, Link and Medli perform the Earth God's Lyric, accompanied by Laruto. This restores a part of the Master Sword ability to slay evil.

The dungeon contains mostly undead enemies. They will occasionally pop out of coffins to attack. There is also a purple mist that can temporarily prevent Link from using any items. Light puzzles are common, including statues that can only be destroyed by beams of light or mirrors that can reflect them into the eyes of a large, solar-powered sun.