From Zelda Dungeon Wiki
Jump to navigation Jump to search
Want an adless experience? Log in or Create an account.
Jalhalla 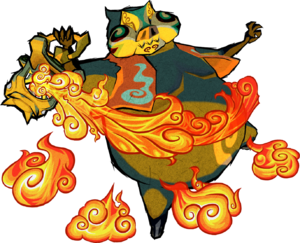 Artwork of Jalhalla in The Wind Waker

Jalhalla is the Boss of the Earth Temple in The Wind Waker. He also appears twice in Four Swords Adventures. He is the ruler of the Poes.

The Poes before fighting Jalhalla

In The Wind Waker, Jalhalla is a combination of many Poes into a single entity, bound together by a self-aware mask. When Link first enters the boss room of the Earth Temple, he will find a group of Poes dancing around. They will all then turn to stare at him and subsequently combine together into the mask to form Jalhalla.

Jalhalla has many different ways to attack Link. He can breathe fire, use his lantern to throw fireballs, or he can body slam Link to possess him. Link must head toward one of the columns of light and then take out his Mirror Shield to reflect the light toward Jalhalla. If Link manages to hold the light on the boss for a long enough time, Jalhalla will solidify and fall to the ground. Link can then pick him up with the Power Bracelets. He must then throw Jalhalla into one of the pillars of spikes along the wall, which will cause Jalhalla to break up into the smaller Poes again. Link can then destroy each Poe one by one using the Master Sword. After defeating five Poes, the others will combine back into Jalhalla again. Later in the fight, the pillars of light will begin disappearing and Link will have to move quickly to keep the light on Jalhalla.

Link needs to repeat this process until all of the smaller Poes are defeated. The mask that previously made up Jalhalla will then waddle toward one of the light pillars and burn up. After the fight, Link will conduct with the Wind Waker for Medli and Laruto to restore some of the lost power of the Master Sword.

Jalhalla also appears twice in Four Swords Adventures. His first appearance is in the Near the Fields stage, The Swamp. When the Links first enters the boss room, they encounter four Giant Ghinis. One Link must stand on each of the four switches to defeat them all. After this is done, Jalhalla will appear. He is defeated by stepping on the switch lighting the torch nearest to him. Jalhalla will be stunned once he hits the light, allowing the Links to attack him. He will then release multiple Ghinis that may also attack the Links. After hitting him a few times, he will also release Anti-Fairies. Continue to light the switches to stun and then damage him.

The second time is during the Infiltration of Hyrule Castle stage. He is defeated in almost the same way, but this time, the lamps must be lit manually with the Lantern, and all four have to be lit to stun him. If the Links are caught in the light from Jalhalla's own lantern, he will extinguish the lights one by one, forcing them to start over. After stunning him, he will also inhale the Links and they will have to defeat a smaller Poe inside of him. Damage this small Poe enough times to defeat him.