From Zelda Dungeon Wiki
Jump to navigation Jump to search
Want an adless experience? Log in or Create an account.
Molgera 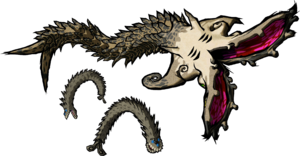 Molgera is the Boss of the Wind Temple in The Wind Waker. It is a giant flying sand snake, which most often contains itself inside the large amount of sand found in the room. Upon entering the room, the large pedstal in the center will sink below the sand. Molgera will reveal itself, flying high into the air and then diving back down into the sand.

Molgera flying around the room at the start of the battle

When Molgera appears back out of the sand, it will make a pit of quicksand appear near where Link stands. Link will need to stay a fair distance away from Molgera itself; otherwise, Molgera will swallow Link and deal two hearts of damage. Link will need to target Molgera's purple tongue with the Hookshot to pull it towards him. Once the tongue is near Link he can then attack it with the hookshot. After enough hits Molgera will retreat into the sand and send smaller versions after him. The hookshot can be used to pull these up from the sand, and then use the sword to defeat them. Otherwise, they can simply be ignored and continue attacking Molgera, but these smaller enemies will accumulate over time.

After the first set of attacks on Molgera tongue, it will eventually resurface where Link is standing. This is hinted by the sand that darkens and begins to sink. Molgera will also launch itself into the air and fly around the room, much like it did at the beginning of the battle. Link will need to continue moving so that when Molgera re-enters the sand, he doesn't hurt Link. This process needs to be repeated a few times; most crucially using the hookshot to grab Molgera's tongue and attack it. After enough hits, Molgera will be defeated and the sand will sink back down to normal levels.