From Zelda Dungeon Wiki
Jump to navigation Jump to search
Want an adless experience? Log in or Create an account.
Helmaroc King 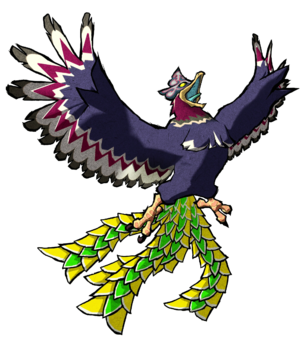 The Helmaroc King is a Boss in The Wind Waker and Four Swords Adventures.

The Helmaroc King is gargantuan bird that, by the order of Ganon, flies around the Great Sea and kidnaps little girls with pointy ears, expecting to find Princess Zelda.

He is first seen capturing Tetra over Outset Island whilst being pursued by the band of pirates. Link watches a cannonball hit the bird and cause Tetra to fall into the woods on the island. Aryll then tells Link that he must rescue the girl. After he rescues Tetra, Aryll is captured by the Helmaroc King and taken away across the sea. Link decides to leave the island and save his sister. Link ventures along with Tetra and her pirates to track down the bird. They find it at a forbidden place, the Forsaken Fortress. The Helmaroc King is sitting in a nest at the very top. Link is fired out of a cannon to sneak into the Fortress. After exploring around, he then enters the central tower where the bird flies in unexpectedly and takes Link to its master, Ganon. The Helmaroc King then throws Link out to sea.

Link later returns to the Forsaken Fortress to rescue his sister. Link faces off against the bird, killing it atop the Fortress's Tower.

The Helmaroc King flying before the battle begins

At the beginning of the battle, all he will do is fly around the area. Every once in a while he will land and try to peck at Link in order to damage him. If Link dodges the attack the bird's face will get stuck in the ground. Link can then pound it with the Skull Hammer to hurt him. The Helmaroc King has other varying attacks during the fight with Link. Namely, the Helmaroc King will float in the air and rapidly move its wings, creating a gust of air that will push Link back against the nearby wall. There are spikes lining the wall, so Link will need to move forward as much as possible to resist taking damage. Finally, the bird will also try to dive at Link, but Link can dodge this by side stepping immediately before the attack. The bird will usually then run into one of the surrounding walls, or the giant ship nearby.

After five hits his mask will fall off, leaving his face vulnerable. The bird will use the same attacks as before, and the process to attack him is still the same. When the Helmaroc King attempts to attack, dodge his peck attack and this time use either the Skull Hammer or Master Sword to attack him. After a few cycles, the bird will fly into the air defeated and explode, leaving behind another Heart Container.

The Helmaroc King also appears as the boss of The Mountain Path stage in the Death Mountain level. The gigantic bird had been terrorizing the Gorons that live on the mountain and had lived on top for quite some time. After the Links reached the top of the mountain they used Bombs in combination with the Magic Hammer to defeat the bird and move on to the Tower of Flames.