From Zelda Dungeon Wiki
Jump to navigation Jump to search
Want an adless experience? Log in or Create an account.
Outset Island 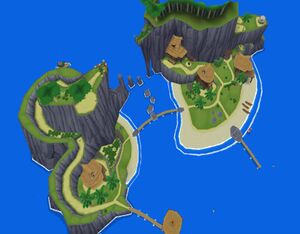 Outset Island is an island in the Great Sea in The Wind Waker. It is home to Link, Aryll, Link's Grandmother and various other residents.

Link's quest begins on Outset Island and it is where Link gets his first sword, loses his sister, and leaves his grandmother to set off on his journey to find Aryll. Later in the game, Link must return to Outset Island to retrieve a Triforce Chart from the Savage Labyrinth, where a Piece of Heart is also located. Link's grandmother becomes sick, but after Link brings her a fairy she becomes well again and decides to make Link her special Elixir Soup.