From Zelda Dungeon Wiki
Jump to navigation Jump to search
Want an adless experience? Log in or Create an account.
Fire Mountain 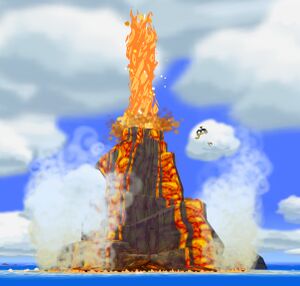 Fire Mountain is an island in The Wind Waker located in C6 (directly south of Dragon Roost Island). It emits infinite amounts of lava, preventing anyone from getting on the island. To get on the island, Link must fire an Ice Arrow obtained from the Queen of Fairies at the column of fire at the top. Once he has stopped the fire, Link has five minutes to climb to the peak, fall inside the volcano, and defeat some Magtails guarding the Power Bracelets. Once Link has acquired the Power Bracelets, the timer stops and the volcano never reignites. Inside the volcano are many Fire Keese that must be avoided while traveling to the platform with the Magtails.

An eight-eyed Big Octo can also be found here. Defeating this Big Octo results in a Light Ring that contains 100 Rupees.