From Zelda Dungeon Wiki
Jump to navigation Jump to search
Want an adless experience? Log in or Create an account.
Link's House 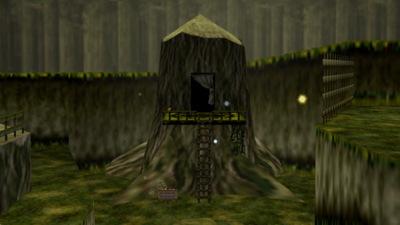 Link's House in Ocarina of Time

Link's House is a recurring location in The Legend of Zelda series. On most occasions, the player begins the game here, although there are exceptions.

"Like other homes in Hyrule, the cottage where Link and his uncle lived was simple. It was furnished with a bed and table, both hand-crafted from logs bought from the lumberjacks in the north. The only unusual furnishing was a finely carved chest that sat in one corner of the room. The home was south of Hyrule Castle, just at the edge of a thick forest where Link and his uncle hunted for their food."

In A Link to the Past, Link's House is actually owned by his Uncle. Link is first seen here sleeping, but then Princess Zelda contacts him telepathically and his uncle leaves, telling him to stay put.

Link's house is square and located just south of the Hyrule Castle. In the bottom-right corner there is a Treasure Chest containing the Lantern, and at the top beside his bed are three jars containing Recovery Hearts.

In the Game Boy Advance port, Wooden Carvings can be obtained to decorate Link's House by solving Q. Bumpkin's Riddle Quest. This requires an active Four Swords file with 10 Medals of Courage on the same cart. 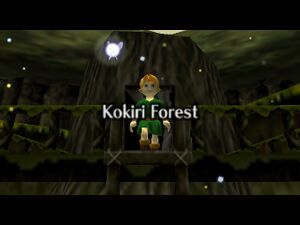 Link walking out from his house in Ocarina of Time

Link's House in Ocarina of Time is a large treehouse within the Kokiri Forest with only one circular room like most of the homes of the Kokiri. It has a bed on one side and a few pots by the wall. Just outside the exit is a porch with a ladder leading to the ground. At the roots of the tree, there is a picture of a monster destroying a city or town, possibly drawn by Link himself. Link begins the game here, sleeping in his bed and having a nightmare. Navi then comes and tells him to visit the Great Deku Tree.

In Ocarina of Time 3D, Link can return to his house to sleep in his bed to regain hearts, or to replay previously completed boss challenges.

In The Wind Waker, Link's House is shared with his Grandma and his little sister, Aryll, on Outset Island. While bigger than previous incarnations, Link's House is still small. It has a kitchen with a chair for Grandma and two bunk beds for Link and Aryll. There is a second floor where they hang the family shield as tradition, as well as multiple pictographs of the family.

Unlike most games, Link does not start the game here. Instead, he comes after being told by Aryll that Grandma wishes to see him. Here he can receive the Hero's Clothes and later the shield. Later, Link can also return to heal Grandma with a Fairy in order to receive Elixir Soup. He can return during any subsequent visit to get more.

Once again, Link's House is shared with another person. It actually belongs to Master Smith. At the beginning of The Minish Cap, Princess Zelda visits Link's House to invite him to the Picori Festival, and Link agrees, following Zelda out of the house.

This version of Link's House has two stories. The top floor appears to be a residential area, with two beds, one of which Link can sleep on later in his journey to recover lost hearts. The first room on the bottom floor is rather simple, with a table and some storage. Through a door leading to the right, one can find the forge that Master Smith works on. There is a treasure chest in the room containing a Red Rupee and two pots. 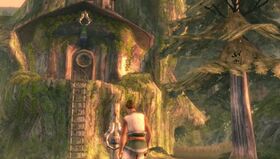 In Twilight Princess, Link has his own house that he does not share with anyone, located at the entrance to Ordon Village, near the Ordon Woods. While the game does not start here, after Link briefly speaks with Rusl he heads home and wakes up the next morning with Fado calling to him. He must then find Ilia, who has taken Epona to Ordon Spring.

Link's House in this game has three stories and a basement, although the second and third stories are not very large. The basement is very dark and requires the Lantern to see, but there is a treasure chest containing a Purple Rupee, worth fifty rupees, as well as a mirror for Link to see his reflection. There is a window on the top story that Link can look out of down at the ground. In addition, there is also a training area beside Link's House, with a training dummy and multiple targets.

Link's House in Spirit Tracks is located in Aboda Village, a small town with few residents. Link shares his house with his roommate, Niko. At the beginning of the game, Niko tells Link the Story of the Spirit War and the history of the land. However, Link falls asleep during the telling of the story. Alfonzo then appears to remind Link that today is when he will receive his Engineer Certificate.

Link's home is located in the south-west corner of Aboda Village, near the ocean. The interior of their house has a small table, a fireplace, a pair of beds, and other items scattered about. Many of the objects relate to The Wind Waker, including a picture of Niko when he was younger, as well as a small model of a Pirate Ship, and a Telescope. Additionally, the Ship Parts found in the home are a reference to Phantom Hourglass.

Although Link does not own an actual house in Skyward Sword, he lives in a dormitory in the Knight Academy on Skyloft. Link's dorm is simple, with a table and a chair in the corner, as well as a bookshelf with a statue of Link's Loftwing. Link can find a Blue Rupee inside his closet. There is a window leading to the outside, where Zelda's Loftwing can deliver mail. Link can return at any point during his journey to sleep in his bed to regain hearts or change the time of day.

In A Link Between Worlds, Link's House is where Ravio sets up his shop after Link completes the Eastern Palace. In the yard, Link has four pots, shrubs, grass, a Weather Vane, and, after activating StreetPass, the apple-bearing StreetPass Tree next to it. Furthermore, a training dummy and two wooden pegs allow Link to test out and practice his various items. 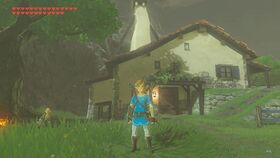 Link in front of his house.

Initially Link does not have a home when he wakes in the Shrine of Resurrection after his hundred-year sleep. He can acquire one in Hateno Village from Bolson Construction through the Hylian Homeowner side-quest for 30 bundles of wood and 3000 rupees for the house, plus 1400 rupees for fittings such as a door and bed. Previously, the house had been scheduled for demolition, having been left a hundred years before by an owner who, according to Karson, "went off to the castle to report for service" and "never came back."

After the EX The Champions' Ballad DLC quest is completed, the Picture of the Champions can be hung on the upper floor of the house, near the window.

Even after the house is purchased, Bolson and Karson will squat in the front garden, near the Cooking Pot, leaving only to attend Hudson's wedding in Tarrey Town. If spoken to after the ceremony, they will return to the same spot outside Link's house.

In Cadence of Hyrule, Link's House is a location in the southern region of Hyrule. All characters start at Link's House except Zelda, who is forced to flee Hyrule Castle, Octavo, who starts in a Fortune Teller's Shop run by one of the Fates, Skull Kid, and Cadence in normal Story Mode. Inside Link's House is the Telescope which requires a Shovel to reach, and the Shield and Short Sword can be found outside. A Piece of Heart can be found on a hill that can be climbed using the Stone Block on the screen. The south exit to the screen is blocked by tree stumps which require a Torch to get rid of.

In Octavo's Ode, Link can be found in his bed, still under the spell cast by Octavo.