From Zelda Dungeon Wiki
Jump to navigation Jump to search
Want an adless experience? Log in or Create an account.
Zora's Domain 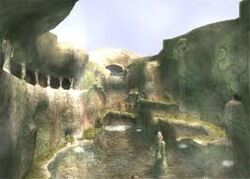 Zora's Domain in Twilight Princess
In Other Languages[show][hide]

Zora's Domain is a recurring location in The Legend of Zelda series. It is the home of the Zora, an aquatic race that controls the water flow into Lake Hylia.

In Ocarina of Time, Zora's Domain is the home to all the Zoras. When Link goes there as a child, he can get the Silver Scale by playing the Diving Game for 20 Rupees, where he can attempt to dive to the bottom of the waterfall and retrieve the five Blue Rupees the owner threw. If Link is successful, the Silver Scale will be his prize. Also, there is a torch puzzle that Link can attempt in order to get a Piece of Heart.

When Link goes there as an adult, he finds Zora's Domain completely frozen over. From here, Link must travel to the Ice Cavern to retrieve the Iron Boots and a bottle of Blue Fire to unfreeze the King Zora. Expressing his gratitude for Link saving his life, King Zora gives him the Zora Tunic.

Located at Lanayru Province, this version of the domain is very similar to Ocarina of Time's. It is the source of all of Hyrule's water, but it is initially frozen over. Link needs to warp a Molten Shard from Death Mountain and drop it inside the throne room. This shatters the ice and the water begins to flow. Unfortunately, almost immediately after this, the ghost of Queen Rutela informs Link and Midna that her son, Prince Ralis, has been found unconscious, and that they need to explore the Lakebed Temple. Like Ocarina of Time, this is how Link obtains a Zora item, in this case the Zora Armor, which is necessary to enter the Lakebed Temple. Later in the game, Link needs to return to Zora's Domain in order to access the Snowpeak Ruins.

Zora's Domain is situated in the Lanayru province once more, but is much more regal in design than in previous renditions. It is surrounded by mountains and is risen above a large lake. The area is troubled by Divine Beast Vah Ruta, as it is causing mass flooding of the East Reservoir Lake, which threatens to burst and drown the domain.