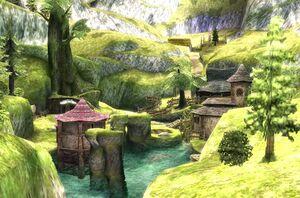 Ordon Village is a very small village to the south of Hyrule in Twilight Princess, the only game it appears in. It is located in the Ordona Province; to the south of the village lies the Ordon Ranch and to the north is the Ordon Spring. Ordon Village is where the Link from Twilight Princess is from, and is home to many other people, including Mayor Bo, Ilia, and Rusl. In all, this village houses 14 or 15 people, give or take.

In Twilight Princess, Ordon Village is the site where the prologue takes place. Link works at the local ranch, helping Fado herd goats. During the beginning of the game, Link must complete many tasks around the village, which includes a number of tutorials. His first task is to finish up herding the goats at the Ordon Ranch.[1] He then awakens the next morning faced with a number of small tasks that he must do to obtain the Slingshot. This includes knocking down a beehive, retrieving Uli's Cradle, returning Sera's Cat, and of course obtaining enough Rupees to purchase it.[2][3] Link also gets the Wooden Sword in this area, as a gift from Rusl; however, Talo borrows the Sword from Link when off in pursuit of the Monkey.[4]

Once King Bulblin attacks Ordon Village, Link is not able to return until he has escaped Hyrule Castle. Once Link does escape his imprisonment with the aid of Midna, he is tasked with finding the Ordon Sword and the Ordon Shield.[5] The Shield is located in Jaggle's House while the Sword is located in Rusl's House.[6][7] Since Link is now in Wolf form, the people of Ordon are hostile toward him and see him as a beast.[8]

Later on in the game, while having to traverse up Death Mountain, the Gorons block Link's path. Due to Link being inferior in terms of strength, he has to return to Ordon Village at the request of Renado.[9] Link speaks to Mayor Bo, who challenges Link to a sumo match, with the reward being the secret to outmatching the Gorons. Once Link has beaten Mayor Bo, he gifts him with the Iron Boots.[10] After this section of the plot, there is no need to come back to Ordon Village.